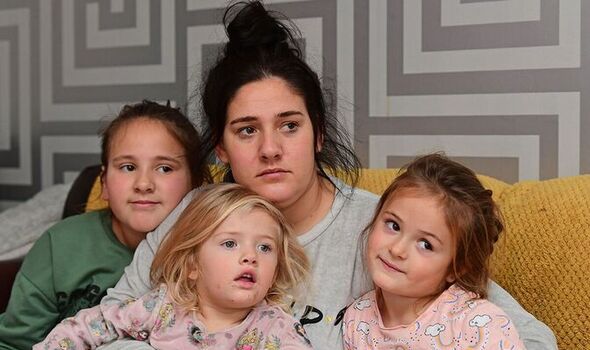 A mother says black mould and constant damp in her flat are making her three young children ill.

Nicole Dutton fears for daughters Ava, nine, Annie, five and three-year-old Arla as they continue to live in squalid conditions in their socially rented flat. Nicole became more worried than ever after the recent death of two-year-old Awaab Ishak who lived in a mould-infested property in Rochdale, Greater Manchester.

There is black mould everywhere and one of the walls is literally coming apart.

Nicole, who lives in Widnes, Cheshire, said: “There is black mould everywhere and one of the walls is literally coming apart. My hallway carpets are damp all the time. I am putting the heating on all the time just to try and keep the place a bit warm but I can’t afford it.

“There is a leak dripping directly into my five-year-old’s room where she sleeps. I was in hospital with her the other day because of her asthma, all the kids have bad chests and colds all the time.

“I didn’t know about the little boy in Rochdale until I saw it two days ago when my little girl was in hospital. It made me so worried with my kids living in a damp, mouldy house.”

Photographs taken by Liverpool Echo show wallpaper has almost entirely come away from the wall in the 31-year-old woman’s flat.

Other images illustrate large amounts of black mould lining Nicole’s windows and window ledges, and patches of damp in various parts of the ceiling.

Awaab was exposed to similar problems in his family’s rented housing in Rochdale.

After reading about the tragic case, Nicole even considering moving home.

But the mum continued: “I don’t want to move because my kids are settled here but I just want them to come out and make repairs to the flat. A roofer did come out and said the place was riddled with damp and black mould.”

Halton Housing claimed it was only made aware of the situation at the end of November and have since started repair work.

A spokesperson said: “Since we were made aware of this issue by the customer on 29th November 2022, we visited the property with a contractor on 30th November to assess the work required, and remedial work has started on December 2.

“The customer’s wellbeing remains our priority.”