A mural intended to pay tribute to businesses who have worked through the pandemic has been criticised for only portraying white people.

Driffield Town Council said the artwork, installed on Middle Street North, depicts “well-known personalities” who work or own businesses in the town centre and was in tribute to those “ravaged by the pandemic”.

However, some residents took to social media to point out it failed to show any people from ethnically diverse backgrounds or anyone with a disability. 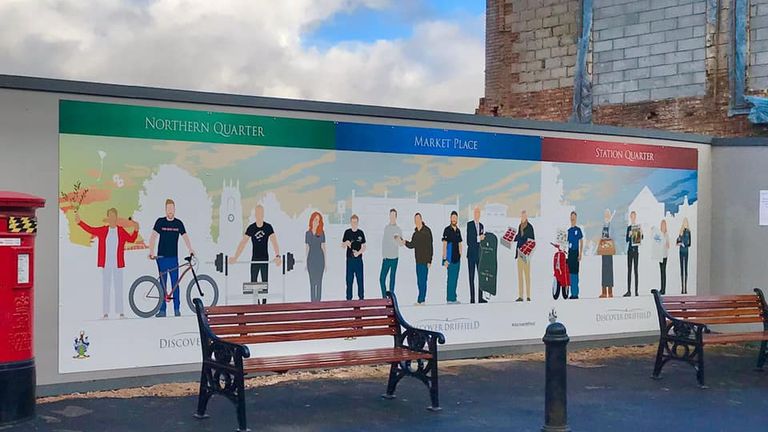 The panels show 15 different people – all are depicted as white and just four are women.

One resident wrote on the council’s Facebook page: “Whilst I really like the idea, it just screams welcome to our ‘white town’ obviously, [being] a minority is even more reinforced by this, which is a shame really.

“Some thought could have gone into [being] a little more inclusive.”

One person labelled it “super unwelcoming” and another a “missed opportunity”.

“This is good but sadly lacks the real diversity in our town, which would have really done the town and town council some good,” wrote another.

Some questioned why professional boxer Curtis Woodhouse, who is from the town, was not included on “Driffield’s wall of fame”.

However, commenting on social media, Mr Woodhouse said: “It’s pretty quick and pretty basic but when I saw it I thought ah that looks nice, it’s a bit white though.”

He added: “I’m not offended by it, if other people are I can see why but I personally am not.”

The town council said the idea behind the panels was to “provide an attractive temporary image” whilst a new care home was being built and to “attract more people to this neglected area of town and provide a much-needed boost to the businesses in Middle Street North”.

In a statement, it added: “The people shown run businesses and shops in Middle Street North, Market Place and Middle Street South, also known as the Northern and Station Quarters.

“The town council and the steering group are working hard to support local businesses and this mural is an attempt to boost the town not to cause negative publicity.”

Some people did praise the mural and asked if it could become a “permanent fixture” in the town.

One resident wrote: “Love how you have brought together the familiar faces of Driffield businesses and made something like this, think it is really thoughtful and personal to our town.”

How about that! Scottish shipbuilding myths debunked…and Scotland hasn’t been ‘betrayed’