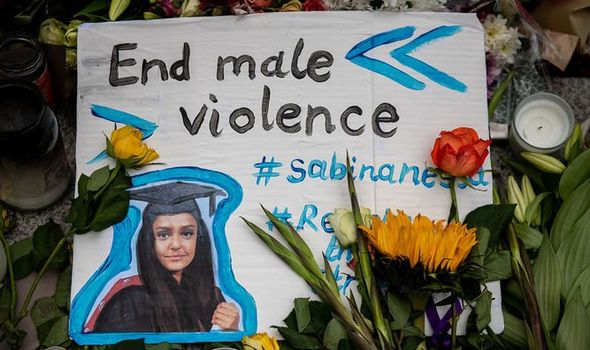 Sabina, 28, who had recently ended a relationship, had spoken about plans to teach children in the United Arab Emirates, according to a close friend. The primary school teacher was killed on a five-minute walk from her home through a park to a bar in Kidbrooke Village, Greenwich, south-east London, just before 8.30pm on Friday, September 17. Her body was found by a dog walker the next day.

Sabina’s friend said yesterday: “She just wanted to live life. She wanted to go to Dubai or the UAE and teach children there.”

Last night detectives said they were “working around the clock” on the case as they issued an urgent new appeal to identify a man spotted on CCTV in Pegler Square, Kidbrooke, shortly before Sabina’s murder. They said: “He must be traced.”

He was holding an object, looking over his shoulder and pulling at his hood. Police believe he may have been trying to hide the object up his sleeve.

Detectives also showed an image of a silver car they believe the man had access to.

A spokesman said: “It is thought that the man is shown holding a reflective red item in the CCTV footage. Officers retain an open mind as to whether this was used in the attack on Sabina.”

Sabina’s murder has led to calls for police to do more to protect women and “use all the powers they have to keep streets safe”.

Yesterday, the reopened OneSpace community centre, which had been sealed off as police searched the surrounding Cator Park, where her body was discovered, opened a book of condolence.

The building, where detectives believe Sabina was attacked, had remained closed until the weekend as a mark of respect, its owners said.

People left emotional messages in both the condolence book and an online version. One posted: “I pray your perpetrator is caught. I didn’t know you but recently discovered you taught a friend’s child who loved you to bits.”

Another said: “Dear Miss Nessa, our daughter’s beautiful teacher, who was always smiling, compassionate and caring.

“We will never forget how you helped settle Miriam into her new class and calm her anxiety and nerves. She loved you dearly and says it won’t be the same without you.”

Meanwhile, mourners continued to leave flowers and candles at a vigil at the site.

She said: “We are devastated by Sabina’s death. She was a brilliant teacher; she was kind, caring and absolutely dedicated to her pupils.

“She had so much life ahead of her and so much more to give and her loss is desperately sad.”

Meanwhile, the Duchess of Cambridge tweeted: “I am saddened by the loss of another innocent young woman on our streets.

“My thoughts are with Sabina’s family and friends and all those who have been affected by this tragic event.”

It is understood that flowers were laid on behalf of Kate, 39, at a candlelit vigil attended by more than 500 mourners on Friday night in Sabina’s memory.

At the event, members of Sabina’s family wiped away tears as they told the crowd of their sorrow.

In an earlier rally at the East London Mosque, Sabina’s sister Jebina Yasmin Islam said: “We have lost an amazing, caring, beautiful sister who left this world far too early.”

Sabina’s uncle, Shahin Miah, described his niece as “a kind and open-minded person”, who was “always smiling and helping others”. He said: “We don’t want what happened to Sabina to happen to anyone else. We don’t want any other mother’s chest to be empty or filled with deep sorrow, or to see the tears in the eyes of any father.”

Yesterday, victims’ commissioner for England and Wales Dame Vera Baird said police needed to do more to make the streets safe for women and girls.

She told BBC Radio 4’s Today programme: “Apparently the police have been giving out rape alarms to women and giving leaflets out saying how to stay safe in a public place.

“It is less, isn’t it, about giving women leaflets on keeping themselves safe in dangerous places and more about the police making the streets safe for women?

“It certainly isn’t just a job for the police but look, the police do have a very key role here.

“Three-quarters of women over 16 have been harassed in a public place and don’t feel safe.

“They need to know that the police understand that and will use all the powers they have got to keep the streets safe.”

Last week, two men aged 40 and 38 were arrested separately on suspicion of Sabina’s murder but were later released under investigation.

Delegates at the Labour Party conference yesterday paid their own tribute to Sabina when they observed a minute’s silence at the gathering in Brighton.

Looking for Something New in Russia’s ‘New People’ Party