Queen's funeral: What to expect from service on 19th September

Funeral directors William Purves are believed to have removed an advertisement from the window before reaching the Scottish capital.

The advertisement was visible as the cortege set off from Balmoral at around 10am and headed towards the city, but had vanished by the time the hearse arrived at the Palace of Holyroodhouse.

The car is believed to have stopped at least once on the journey so the driver was able to rest.

The 175-mile journey saw the hearse travel through Aberdeenshire, Aberdeen, Angus and Tayside, before reaching the capital.

This is when the sticker was likely to have been removed, commentators claimed. 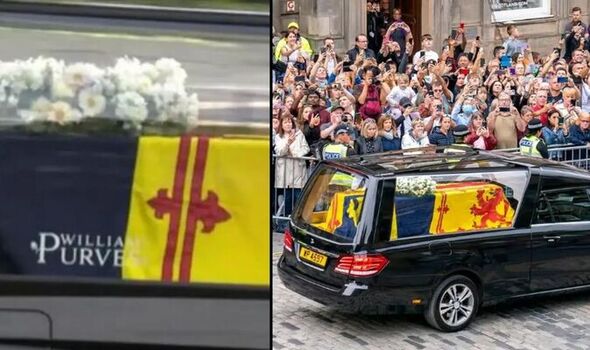 But not before eagle-eyed viewers noticed the sticker and attempted to visit the funeral director’s website, which subsequently crashed.

An error message on the site appeared for some time after the hearse first was spotted around 10am.

The undertakers revealed that the logo had been removed at the “earliest opportunity” to “redirect” attention to the late Queen on the sombre day.

The funeral directors were selected by the Lord Chamberlain’s Office. 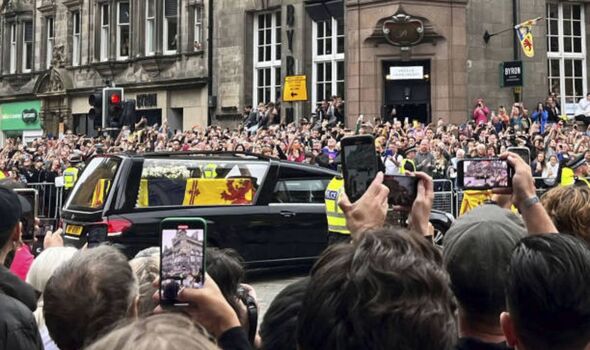 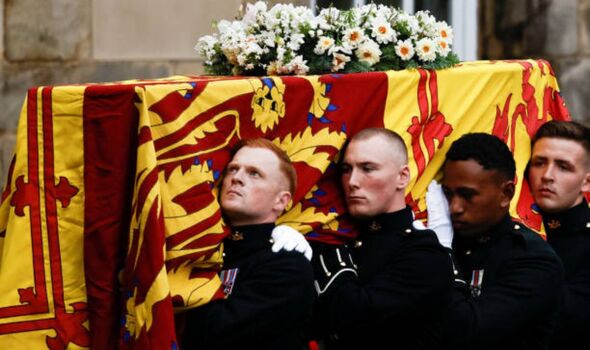 The Scottish-based firm was hired for the first leg of the Queen’s final journey from Balmoral to Edinburgh before she will later be transported back to London.

A spokesperson for William Purves told the MailOnline: “It was a heavily rehearsed and meticulously planned event with all parties including the hearse and funeral directors under lord chamberlains authority.

“We received a high volume of attention as soon as the hearse left Balmoral and we took the first opportunity we could to redirect the attention to Her Majesty – it’s not about us, it’s about her Majesty.”

Once it arrived in Edinburgh at around 4.30pm, the Queen’s coffin was received by her grieving children, Prince Andrew and Prince Edward, along with Edward’s wife, Sophie, Countess of Wessex. 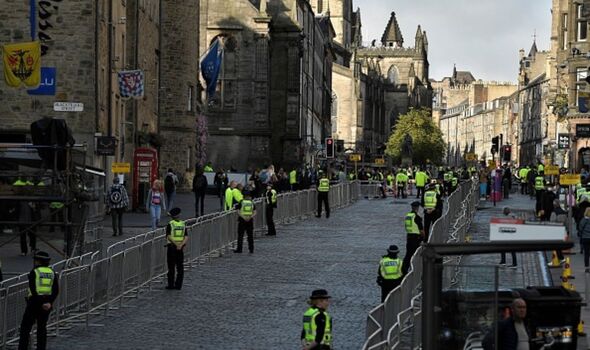 The coffin was then laid to rest overnight in the Palace of Holyroodhouse in the Throne Room.

On Monday, it will travel to St Giles’ Cathedral in Edinburgh, along the Royal Mile, with King Charles III and the late Queen’s other children following behind on foot.

The Queen’s body is expected to lie in state at the cathedral, where members of the public will be able to visit and pay their respects, before travelling down to London later in the week.