Home » Europe » Mystery over US warning about Irish music festival 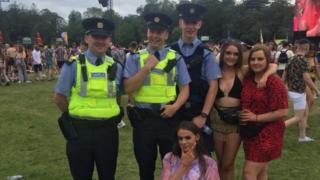 There are questions over why the US embassy in the Republic of Ireland told American citizens to avoid a music festival due to a risk of “violence”.

The Longitude festival is taking place over three days this weekend at Marlay Park in south Dublin.

Gardaí (Irish police) said there was a “great atmosphere” at the event on Friday and “no incidents of note”.

The festival promoter said the US embassy’s warning was “beyond ridiculous”, reports the Irish Times.

“There are more questions than answers, to quote that old blues song,” said Denis Desmond of MCD Productions.

The US embassy in Dublin issued the warning on its website on Friday.

It headlined the message as a “security alert” and advised US citizens to “avoid Marlay Park and the areas surrounding the park”.

The embassy also claimed that “reports indicate a potential for violence at the Longitude festival”.

“Police are aware of the threat and will conduct comprehensive bag and person searches,” it added.

But on the same day Garda Síochána (Irish police force) announced on its Twitter account that “the party has started at Longitude”.

It posted photos of several officers “getting in the party mood with revellers”.

The party has started at Longitude, have a brilliant weekend.

Gardaí getting in the party mood with revellers pic.twitter.com/rY3qy2AapT

Marlay Park is a 300-acre suburban park in Rathfarnham, south Dublin, that has hosted large music festivals for several years.

This weekend’s festival features more than 50 acts and is headlined by rapper Stormzy and singer-songwriter Anne-Marie.

US citizens who could not avoid Marlay Park have been advised by the embassy to “keep a low profile” and “notify friends and family of your safety”.

Mr Desmond said there was “something not adding up about all this”, according to the Irish Times.

“There are 35,000 people here having a good time and there are no issues whatsoever.”

Longitude Festival continues today, gates open 13.30hrs. Great atmosphere yesterday, no incidents of note. Plan your journey, arrive early, as normal there will be security and ticket/bag checks at the venue. See our website https://t.co/wL9LpTDBgm pic.twitter.com/qDOY30AAzj

BBC News NI has tried to contact the US embassy to ask where the information had come from that led to its alert.

An embassy spokesperson told the Irish national broadcaster RTÉ on Friday he had no further information beyond what was issued in the security notice.

When asked about US warning, gardaí said they do not comment on “statements made by third parties”.

“No incidents have been reported to date.”

Camilla heartbreak: Why Charles will put huge pressure on Duchess when he claims throne