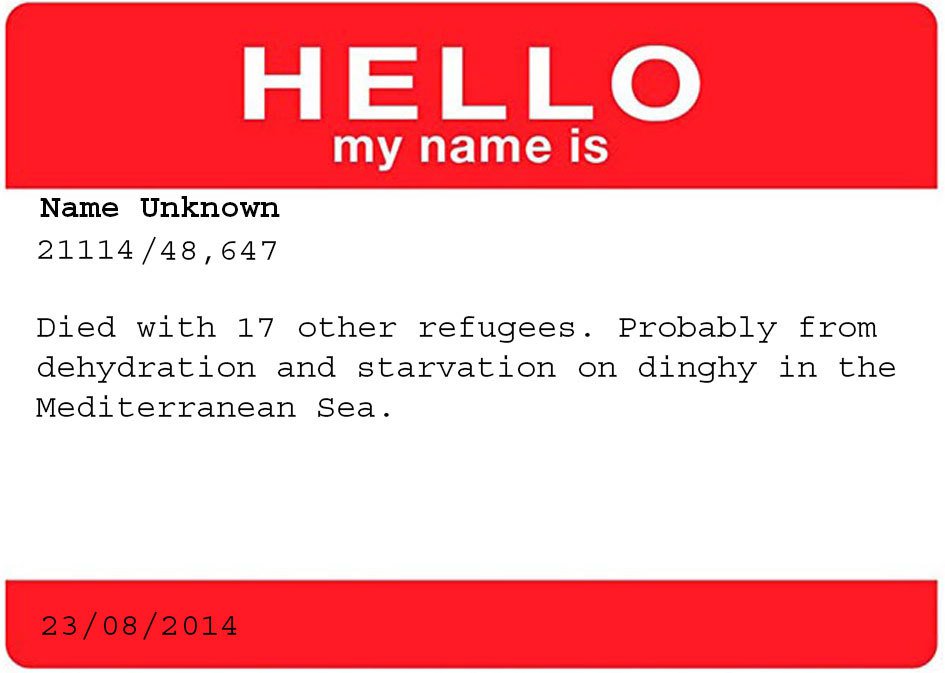 More than 60% of those who die on migratory routes remain unidentified as their families are left searching for answers, and their deaths remain just a statistic.

Christoph Jones has set out to change this with the art project ‘The Refugee List’, where he eulogises those who did not survive.

From his home in Battersea, south London, he creates ‘Hello, my name is’ badges that carry the date on which a migrant lost their life, and where.

‘Drowned with 486 other refugees in the Mediterranean Sea after traffickers sank boat carrying 500 migrants.’

The second year MA student at the Royal College of Art uses figures compiled by the United For Intercultural Action, and updated annually.

‘I remember reading about a young man who had drowned in a tiny dinghy in the Mediterranean Sea on a specific date,’ the 32-year-old told Metro.co.uk.

‘Underneath on the list, there was a young woman who had died at the very same time, in the same place.

‘And then, there were two young children. I realised I had just read the details of a young family who had all died in the middle of the sea, cold and alone, slowly and painfully.’

‘The Refugee List’ is a multimedia piece aiming to eulogise the people who die trying to seek asylum in Europe.

What started as a final year degree show project in June 2019 has turned into an ongoing mission to draw attention to the refugee crisis.

‘Before they can object to it, I would just stick it on them and then walk away. This is the point. I have undermined their consent only to place an identity upon them, which is what happens to refugees.

‘They get identified as refugees or asylum seekers or vermin or swarm or invaders.

‘This is something that they did not choose for themselves. So, I am sort of doing a much smaller and less violent version of that to visitors in the gallery.

‘It is quite rude, but that was kind of the point, and it was more successful than I thought. I expected people to just take it off and get rid of it, and that did happen a bit.

‘But it was very, very rare. Most of the time, people were shocked and very sad. They realise this is the identity of a real person attached to them.’

Christoph held a second performance at the Truman Brewery in Shoreditch the year after, working his way through the list, which was started in 1993.

Only managing to go through a few thousand people, he felt it was ‘completely unethical’ for him to ‘just dip in and out’, so he felt obliged to finish it.

This is how the project was born on social media, engaging with thousands of people over the last three years.

When Christoph started, there were about 31,000 people on the list, but every year more and more are added.

Though a lot of the process has been automated over time, he had to manually enter the data at first – a process, which he described as ‘incredibly depressing’, and not good for his mental health.

What helps the student carry on is all the support he receives from followers of ‘The Refugee List’.

‘Most of the comments I get are positive. Normally, people acknowledge how horrible the refugee crisis is and leave tributes to those who have died,’ he said.

‘This is really encouraging. It is great to know people are actually listening and are affected by it because I honestly thought no one would be interested when I started the project.

‘I imagined having some 50 followers for the next decade and simply doing it for the sake of it.

‘There are also some negative comments. It is everything from people parroting really horrible things that our politicians have said, and anti-refugee rhetoric on the news, to neo-Nazi slogans.

‘It is the things that you would see as part of anti-Jewish propaganda in the 1930s and 1940s, wishing death and violence on people mentioned in the badges.

‘It does not matter whether the victim would be an adult or a child, they do not care. They will celebrate the death of a child in the comments section. It is truly horrific.’

United For Intercultural Action is expected to release the updated list with the names of victims in the beginning of 2023.