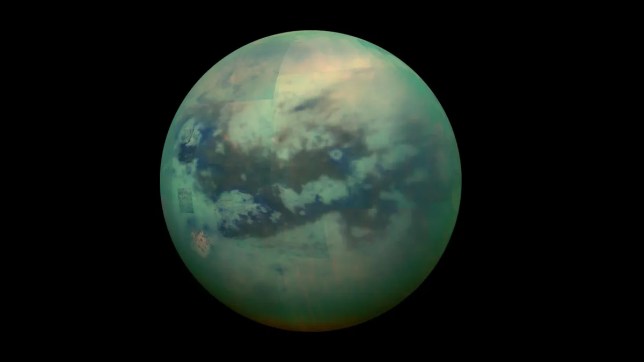 Last month, an international team of planetary scientists woke up with ‘great delight’ to the first Webb images of Saturn’s largest moon, Titan.

The scientists, who are using Webb to investigate Titan’s atmosphere and climate, have described their initial reactions to seeing the data in a statement from Nasa.

‘We had waited for years to use Webb’s infrared vision to study Titan’s atmosphere, including its fascinating weather patterns and gaseous composition, and also see through the haze to study bright and dark patches on the surface,’ said the researchers.

‘Titan’s atmosphere is incredibly interesting, not only due to its methane clouds and storms, but also because of what it can tell us about Titan’s past and future – including whether it always had an atmosphere,’

Titan is the only moon in the solar system with a dense atmosphere, and it is also the only planetary body other than Earth that currently has rivers, lakes, and seas.

Unlike Earth, however, the liquid on Titan’s surface is composed of hydrocarbons including methane and ethane, not water. Its atmosphere is filled with thick haze that obscures visible light reflecting off the surface.

By comparing different images captured by Webb’s Near-Infrared Camera (NIRCam), the scientists soon confirmed that a bright spot visible in Titan’s northern hemisphere was in fact a large cloud. Not long after, they noticed a second cloud.

‘Detecting clouds is exciting because it validates long-held predictions from computer models about Titan’s climate, that clouds would form readily in the mid-northern hemisphere during its late summertime when the surface is warmed by the Sun,’ said the scientists.

In 2019, Nasa confirmed ‘The Dragonfly mission’, to search Titan for alien life.

A spacecraft is set to explore the surface of the moon and search for ‘the building blocks of life’, the space agency revealed.

Part of Nasa’s New Frontiers programme, the mission will launch in 2026 and arrive at Titan in 2034. It will be the first time Nasa will fly a multi-rotor driven vehicle for science on another planet.