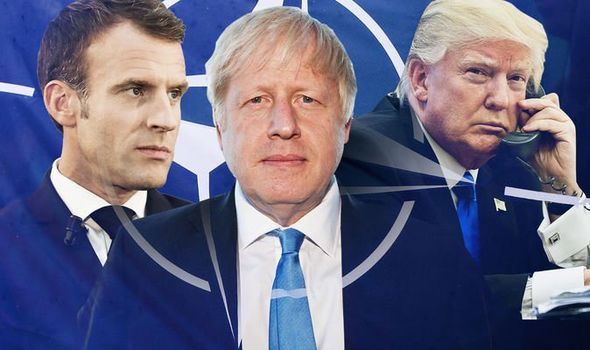 Donald Trump is also likely to strain the alliance with fresh demands for smaller countries to pay more towards their defence. Protesters are planning to demonstrate outside Buckingham Palace over the president’s third visit to London. Downing Street said the Prime Minister will tell leaders they must unite after experts warned that France, Turkey and the US could derail the gathering to mark Nato’s 70th anniversary.

A No 10 spokesman said: “The PM’s view is that Nato is the most enduring and successful alliance in military history and that continues to adapt to the military threats that we face.

“It is the cornerstone of Euro/Atlantic security and it helps to keep a billion people safe.

“The PM will emphasis that all members must be united behind shared priorities so Nato can adapt to the challenges ahead.”

Turkey’s incursion in Kurdish northern Syria in October after the US pulled out its troops inflamed tensions in Nato.

Mr Macron said the alliance was suffering “brain death” over the failure of its members to reach agreement on key issues, including the Turkish attack. 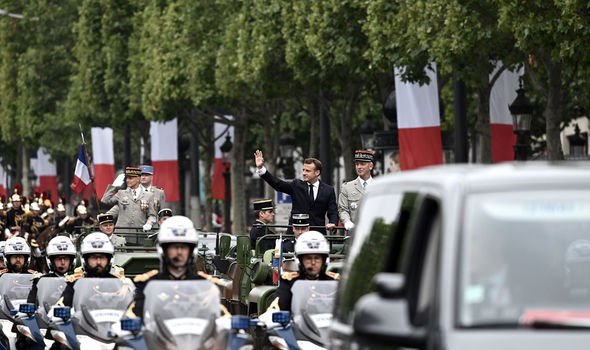 But his Turkish counterpart retaliated by turning the insult on the French president and accused him of having a “sick and shallow” of the alliance.

“I’m addressing Mr Macron from Turkey, and I will say it at Nato: you should check whether you are brain dead first,” Mr Erdogan said.

Mr Johnson will host the French and Turkish presidents, along with German Chancellor Angela Merkel in Downing Street for talks today before all 29 Nato leaders attend a Buckingham Palace reception in the evening hosted by the Queen and the Prince of Wales.

Anders Fogh Rasmussen, a former secretary-general, said the decision to hold a scaled-back gathering instead of a full blown summit on the organisation’s 70th anniversary underlined the tensions.

“It’s a very unusual celebration that also reflects the internal political splits within Nato,” he said.

Mr Trump landed in the UK late last night and is staying at the US ambassador’s residence, Winfield House, a mansion in Regents Park.

The president’s arrival in the UK in the middle of a general election campaign will leave campaigners on alert after he made explosive interventions in British politics during previous visits.

Mr Johnson insisted last week that the UK and US have “very close relationships” at “every level” of government.

But he suggested the President should avoid intervening during the visit.

“What we don’t do traditionally is, is get involved in each other’s election campaigns,” he said.

Nato’s role in responding to threats around the world and how to tackle cyberwarfare are on the agenda.

But defence spending and the future of the military alliance will dominate discussions at the meeting this week at the Grove Hotel in Chandler’s Cross on the outskirts of Watford.

For the last seven years, the UK has been the second highest spender in Nato, spending 60.4 billion dollars on defence in 2018.

The US, meanwhile, has spent more than twice as much on defence than the rest of Nato combined over the same period.

Only four other countries – Greece, Poland, Latvia and Estonia – also meet the target of spending at least two per cent of GDP on defence.

Mr Trump has been critical about the low spending levels of many alliance states and claimed the US been “treated very unfairly by friends of ours, members of Nato” over a period of years.

But M Macron said it was regrettable that Nato summits have become focused “only on how to alleviate the financial cost for the United States” instead of its strategic purpose.

The North Atlantic Treaty Organisation was formed in 1949 to prevent a resurgence of nationalism and militarism in Europe after two world wars and to deter the Soviet Union’s expansion.

Its ranks have swelled to 29 member nations who agree to mutual defence in response to an enemy attack.