Lawyer David Allen Green warned the deal will “not bring Brexit to an end”, as he began analysing the 1,246-page document. He said on Twitter: “About ten pages of the UK-EU trade agreement are devoted to setting up, without exaggeration, dozens and dozens of UK-EU talking shops. Committees, assemblies, working groups, and so on.

“All with various powers and functions.

“Welcome to the future, negotiations without end.”

On his ‘The Law and Policy’ blog, Mr Green added Brexit will be a prolonged “contested subject for at least a generation”.

Writing in his influential blog on Boxing Day, the expert on topical law and policy matters said: “Brexit will be a contested subject for at least a generation. 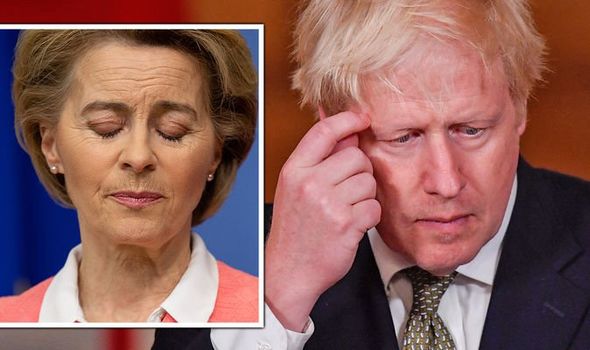 “This trade agreement may be bringing part of the Brexit story to a formal conclusion, but it certainly does not bring Brexit to an end.”

One wary follower of Mr Green tweeted: “So long as they remain talking shops.

“The danger is that we gradually get drawn back in whilst the public is looking elsewhere.”

Another commented: “Wait a minute, didn’t the Brexiteers want to get away from ‘all the bureaucracy’?”

Now that the UK will leave the EU next Thursday, two separate markets will be formed.

The EU and the UK will be able to trade goods with each other without the addition of tariffs and quotas.

However, a separate deal needs to be implemented for the UK’s financial services industry.

Prime Minister Boris Johnson, at a press conference at Downing Street on Christmas Eve, said: “We have taken back control of our laws and our destiny.

Mr Johnson that the final agreement was a “good deal for the whole of Europe”.

European Commission President, Ursula von der Leyen responded at her own press conference by quoting a line from the Beatles, she said: “This was a long and winding road but we have got a good deal to show for it.”

Mr Johnson added the £668bn a year agreement would “protect jobs across this country and enable UK goods to be sold without tariffs, without quotas in the EU market”.

Mr Johnson conceded to some of the EU’s demands on fishing rights.

He said: “The EU began with I think wanting a transition period of 14 years, we wanted three years, we’ve ended up at five years.”

The UK’s main economic engine is its financial services sector.

Both the EU and the UK have agreed to discuss financial services separately.

UK based financial institutions will lose access to the EU’s single market on January 1.

Financial institutions based in the UK will have to be granted equivalence rights by the EU to operate in the bloc.

Temporary equivalence rights have been granted by the EU to the UK’s derivatives contracts.

Coronavirus: This is how it feels to be in intensive care with COVID-19 – a survivor’s graphic story