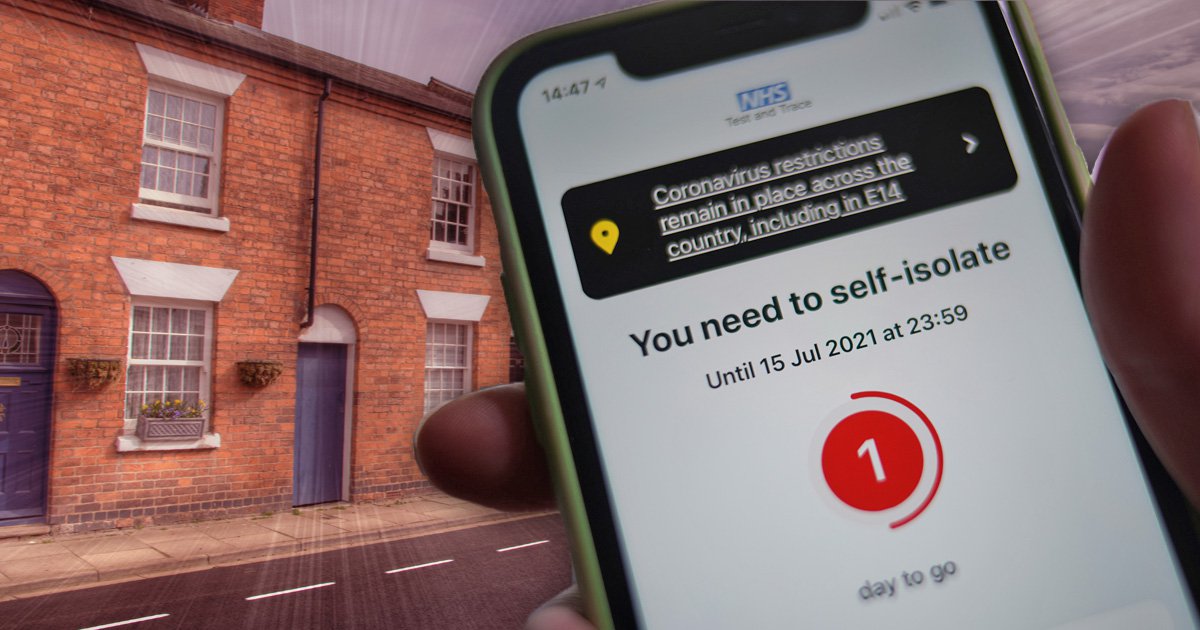 NHS Test and Trace is penetrating through walls and forcing neighbours to self-isolate in the latest sign of a ‘pingdemic’.

A record half a million alerts were sent through the app last week, raising fears of a lockdown by stealth as businesses and transport are brought to a standstill.

Some people are being forced into a 10-day quarantine even if they haven’t had face to face contact with a positive Covid-19 case.

According to the Telegraph, the Test and Trace app team are aware that the Bluetooth signal, used to judge how close someone’s phone is to another, is strong enough to penetrate brick walls.

It means people are being ‘pinged’ if their neighbour has tested positive, even if they have not left the house or been in close contact with the infected person.

‘We are hearing of anecdotal cases and we do know that it is possible for the signal to travel through walls, although it is weakened,’ one source said.

‘The app has been calibrated to try to avoid that happening, but we are reviewing the issue of notifications carefully.’

It is understood the issue was raised as a concern in the early stages of building the technology.

Although it is being reviewed, Whitehall sources told the paper that any changes would not be made for some weeks.

As a result, people are being forced into isolation when a neighbour whose home they share a wall with has tested positive for Covid.

Hundreds of people have complained on social media that they’ve been ‘pinged’ by the app despite not leaving their homes.

One carer said she had to cancel her dad’s cancer appointment after two neighbours tested positive for Covid.

Dr Fiona Sampson, a senior research fellow in emergency and urgent care at the University of Sheffield, said her partner got an alert – despite not leaving the house on the day of the contact.

She said: ‘We later realised he had been working with his phone on the table, less than two metres away from our neighbour.’

It is not clear how many people have been pinged through walls.

Have you been affected by the issues raised in this piece? Email [email protected]

A government spokesperson admitted it does happen but insisted the number was not large enough to be considered ‘an issue’.

It was revealed yesterday that more than half a million alerts were sent to users of the NHS Covid-19 app in England in the space of a week.

A total of 520,194 notifications were sent in the week to July 7, telling people they had been in close contact with someone who had tested positive for coronavirus.

This is up from 356,677 the previous week – a jump of 46% – and is the highest weekly figure since data was first published in January.

Communities Secretary Robert Jenrick admitted the government is ‘concerned’ about the number of people off work after receiving the dreaded ‘ping’.

Currently around one in five workers in hospitality and retail are thought to be self-isolating, NHS hospitals are reporting staff absences and up to 25% bus and train services are frequently cancelled or delayed due to driver shortages.

Meanwhile, some Liverpool bin collections are being stopped until August as isolations surge among council staff.

The app works by using an algorithm based on a weakened Bluetooth signal to track those who have been within two metres of someone with Covid for 15 minutes or more.

Ministers are concerned many people are deleting the app to avoid having to isolate.

Mr Jenrick said the Government is going to set out its plans ‘in the coming weeks’ for a more proportionate approach.

A government spokesman said: ‘There is no issue with the app tracing close contacts through walls.

‘The NHS COVID-19 app has been downloaded more than 26 million times, saved thousands of lives and stopped hundreds of thousands of cases by doing exactly what it is designed to do – informing close contacts of someone who has tested positive for COVID-19 they are at risk and advising them to isolate.

‘In the context of rising cases it is vital people are aware of their personal risk so they can make informed decisions on their behaviour to protect those around them.’