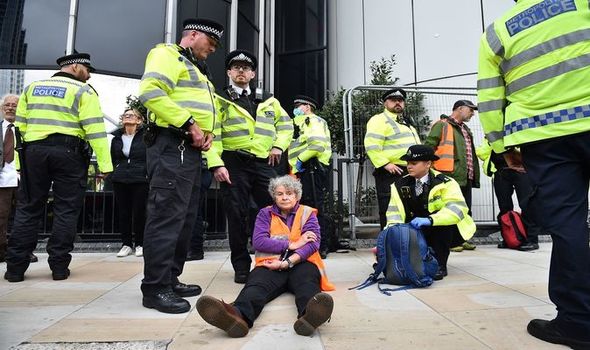 But they warned motorists not to take vigilante action against Insulate Britain activists who have become reviled for blocking roads and motorways. The Extinction Rebellion splinter group struck again on the M25 and in London on Friday. Video has emerged of motorists dragging them off the roads because they were holding up ambulances. But confronting them actually risks adding to delays, police have warned.

Chris Noble, the National Police Chiefs’ Council lead for policing protests, has called for further “legislation and powers that are clear, current and capable of being enforced”. He said many of the public order laws are over 30 years old and protest activity is “dynamic and constantly changing”.

Home Secretary Priti Patel unveiled criminal disruption prevention orders at the Tory Party conference last week in a bid to stop repeat activists from travelling to protests. She also announced stop-andsearch powers for those suspected of carrying items to attach themselves to motorways.

Ms Patel has already said those blockading routes face prison sentences of up to six months – increasing the punishment from a £1,000 fine. John Apter welcomed the announcements, saying: “We need to see whatever tools she can give my colleagues to help.”

He branded protesters “beyond reckless” but defended officers after they were accused of taking a soft approach. Mr Apter said: “Colleagues are being unfairly berated by critics who do not understand policing and how police powers work.”

In the meantime, Mr Noble has warned the public not to take matters into their own hands, even though police sympathise with how inconveniencing the protests have been.

He said: “What these protesters are doing is illegal. They are disrupting the lives of people and businesses, wilfully obstructing highways and taking up valuable police time. We completely understand and share [driver] frustrations.

“But we would ask members of the public to please let the police deal with those protesting. If police are needed to intervene between the public and protesters, this will divert them from dealing with the protest and reopening the road. Whenever these events occur, they will be dealt with.”

Meanwhile, Insulate Britain leader Liam Norton says he and fellow activists are surprised they haven’t yet been jailed, saying: “We’re just as mystified as the rest of the public as to why Priti Patel hasn’t put us into prison.”

In a bizarre interview with TALKRADIO yesterday, he also admitted being a hypocrite for not having his home insulated.

‘Make a great Queen!’ Her Majesty approves of Kate as her successor says royal insider