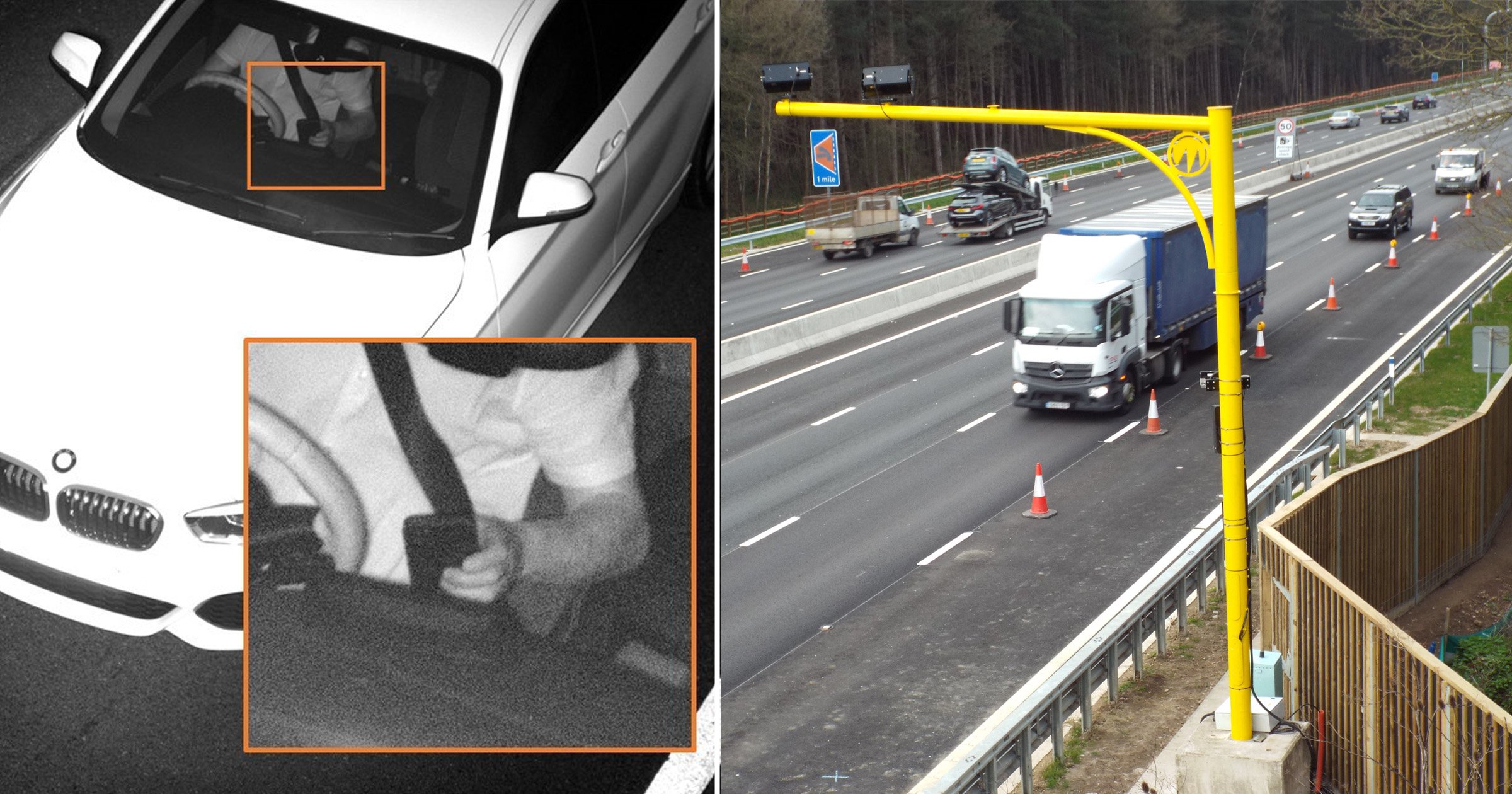 A new motorway camera has caught thousands of distracted motorists using a mobile behind the wheel.

The cameras instantly catch people using a phone and are being trialled on motorways across the UK.

Shocking findings from the trial suggest one in 200 drivers use their phone while driving on the motorway.

It is estimated that if a driver looks at their phone for two seconds travelling at 30mph, they will drive ‘blind’ for 100ft.

During the course of the trial, a single camera caught 15,000 people with a phone in their hand in just six months.

But the true figure will be much higher as the cameras were not monitoring all lanes of traffic, and were not used continuously.

The new technology could be a game-changer for police, as officers have only been able to catch offenders while driving alongside them.

The cameras use artificial intelligence to instantly analyse high definition photos taken through the windscreen of every passing vehicle.

They can be fitted to overhead gantries or portable trailers, taking images in all weathers and without blurring at speeds reaching 185mph.

Sophisticated software sifts through them in real-time, flagging any showing someone with a phone in their hand to be reviewed by a human moderator.

If the cameras are legally approved, drivers face being sent notices of intended prosecution similar to speeding penalties.

Tech firm Jenoptik believes they will be crucial in providing evidence to prosecute offenders.

Geoff Collins, of Jenoptik, said the trial showed a ‘scary’ number of drivers were using phones on the motorway.

‘Current findings suggest one in 200 vehicles show mobile phone misuse. This is a worryingly high figure,’ he told MailOnline.

The offenders identified by the high-tech kit will not be penalised, however, as the trial is a ‘proof of concept’ and will need a change of law to be enforced.

Mr Collins said there has been a ‘high level of interest’ in the cameras – designed by the Australian firm Acusensus – from highway authorities and police forces.

‘Using a handheld mobile phone significantly increases the risk that a driver will be involved in a collision,’ he said.

‘But until now it has been difficult to monitor and stop this behaviour. These trials have proved that AI can flag up drivers who continue to flout the rules.’

The technology is already used in New South Wales, Australia, where it is estimated to have reduced road fatalities by a fifth since it was introduced two years ago.

The UK trial is understood to be part of a wider project to improve road safety, the smart cameras which are capable of telling if drivers are using their phone at the wheel are also able to detect if people are wearing seatbelts.

No decision has been taken as to whether they will be rolled out beyond the trial.

Jeremy Phillips, National Highways head of road safety said: ‘Safety remains our top priority and we want everyone to get to their destination safely.

‘Sadly, there are still drivers who don’t feel the need to wear a seatbelt or become distracted by their phones.

‘Our advice is clear, please buckle up and give the road your full attention.’

Anyone caught using their phone while driving faces a £200 fine and six points on their licence.