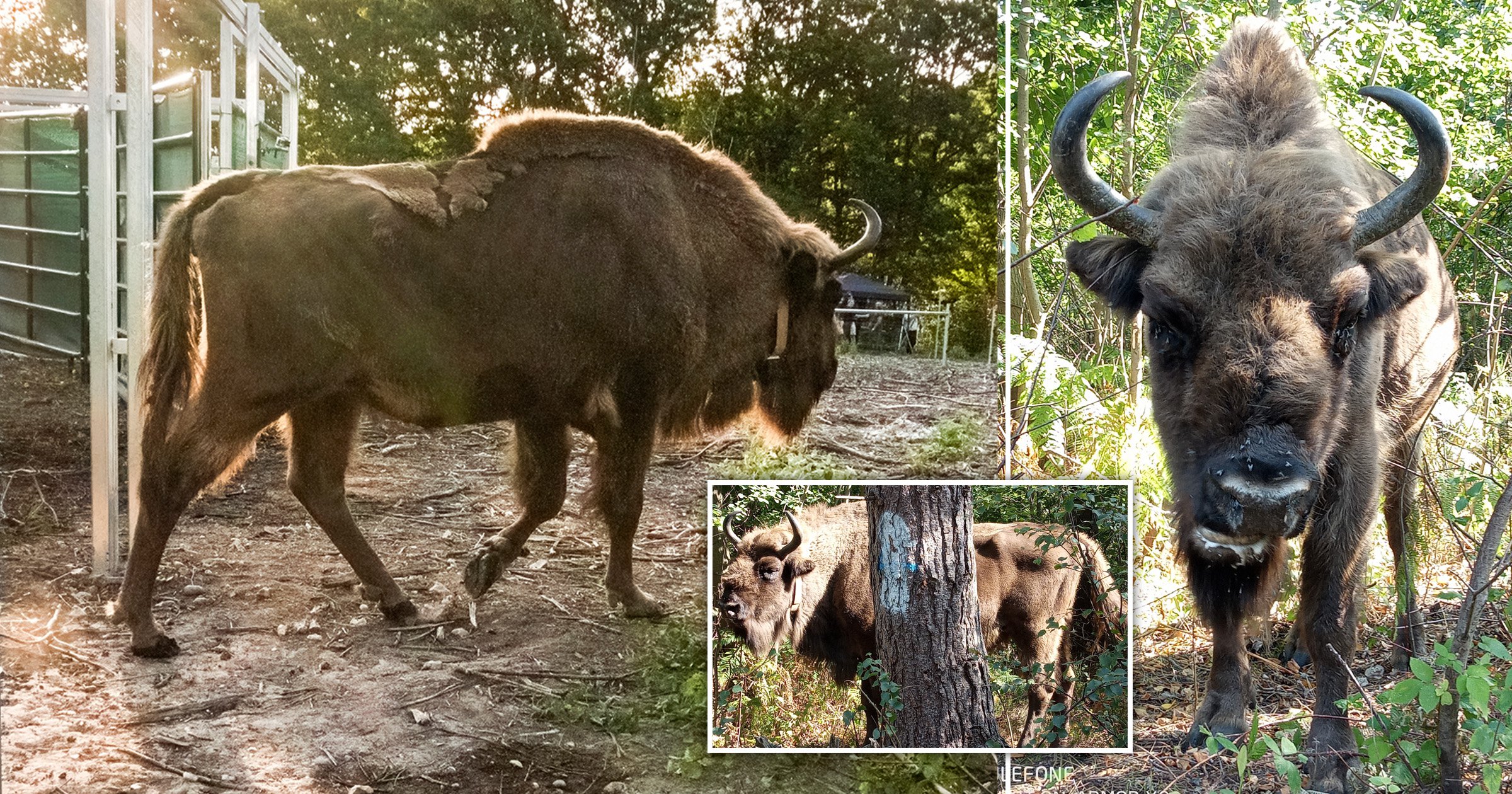 These new pictures show the trio exploring their new surroundings ahead of a male joining them from Germany in the next few weeks.

Rangers say the group have already formed a family hierarchy, with the matriarch firmly establishing who is in charge – and even stepping in when the dominant calf becomes ‘overly pushy’.

The enormous mammals returned to the UK for the first time in thousands of years in mid July, in a pioneering project which aims to revitalise nature in an ancient woodland.

And already experts are seeing the impact of the bison in the Wilder Bean project, with the animal’s unique behaviours offering plant and animal life new opportunities to thrive.

Bison ranger Tom Gibbs told Metro.co.uk: ‘The bison are doing amazingly well. They are finding their own food with ease; we have seen them eating birch, oak, sweet chestnut, brambles, bracken and even a little bit of heather.

‘They have even begun to debark the conifer trees, which is fantastic as a key focus of the project is the bison controlling the non-native trees within the woodland.’

Bison fur – which can be used by nesting birds, among other animals – is already visible on the trees.

‘Already we are seeing tracks starting to form and thick vegetation opening up’, Tom continued.

‘We are coming across the wide corridors they have made and can see when they have trampled dense areas which has allowed more light to reach the woodland floor.’

The unexpected light will allow more opportunities for plants, insects and biodiversity generally, much like the new habitat they create in the trees.

The animals, which tend to be found in North American, have been hailed as ‘eco-system engineers’.

It is hoped that they will make the Kent woodland more varied, spread seeds and create wetter areas, which will store carbon and reduce flooding.

They had been nearing extinction in Europe until a resurgence in their numbers in more recent decades.

For people who want to see the new Kent locals, the Kent Wildlife Trust (KWT) advocates staying at a safe distance and not being loud.

Viewing points have been set up, but wildlife lovers will have to get lucky with where the bison are at any given time – for the foreseeable future at least.

The KWT’s director of conservation, Paul Hadaway, told Metro.co.uk: ‘In order to meet the legal requirements for the bison to roam freely, secure fencing has been erected around the bison area… to ensure that people do not get too close to the animals.

‘Though docile in their nature, the bison is considered a dangerous animal in UK law – although on the continent where wild bison projects have been running for 20 years or longer the legislation is far more relaxed.

‘Part of this project is about demonstrating to UK policy makers the need for changes to better reflect the experience from Europe around licencing for these sort of projects.’

The forest has a number of footpaths but curious walkers will not be able to come into direct contact with Europe’s largest land mammal.

To avoid interaction and allow the bison to move freely from one section of woodland to another, special ‘bison tunnels’ have been built.

They also give people in the area a better vantage point to see their new females – who rangers hope will have calves when their male companion eventually arrives following Brexit-related delays.

‘We want to limit human interaction with them’, Paul adds.

‘(But) the best chance of seeing a bison is to remain quiet.’

Those who do manage to catch a glimpse are likely to find the bison in good health, with the rangers pleased with their physical progress and interactions as a herd.

Tom explained: ‘They are doing well physically too. We have been checking their dung, as this is an indicator of health, and it shows they are getting enough fibre and their diet is good. 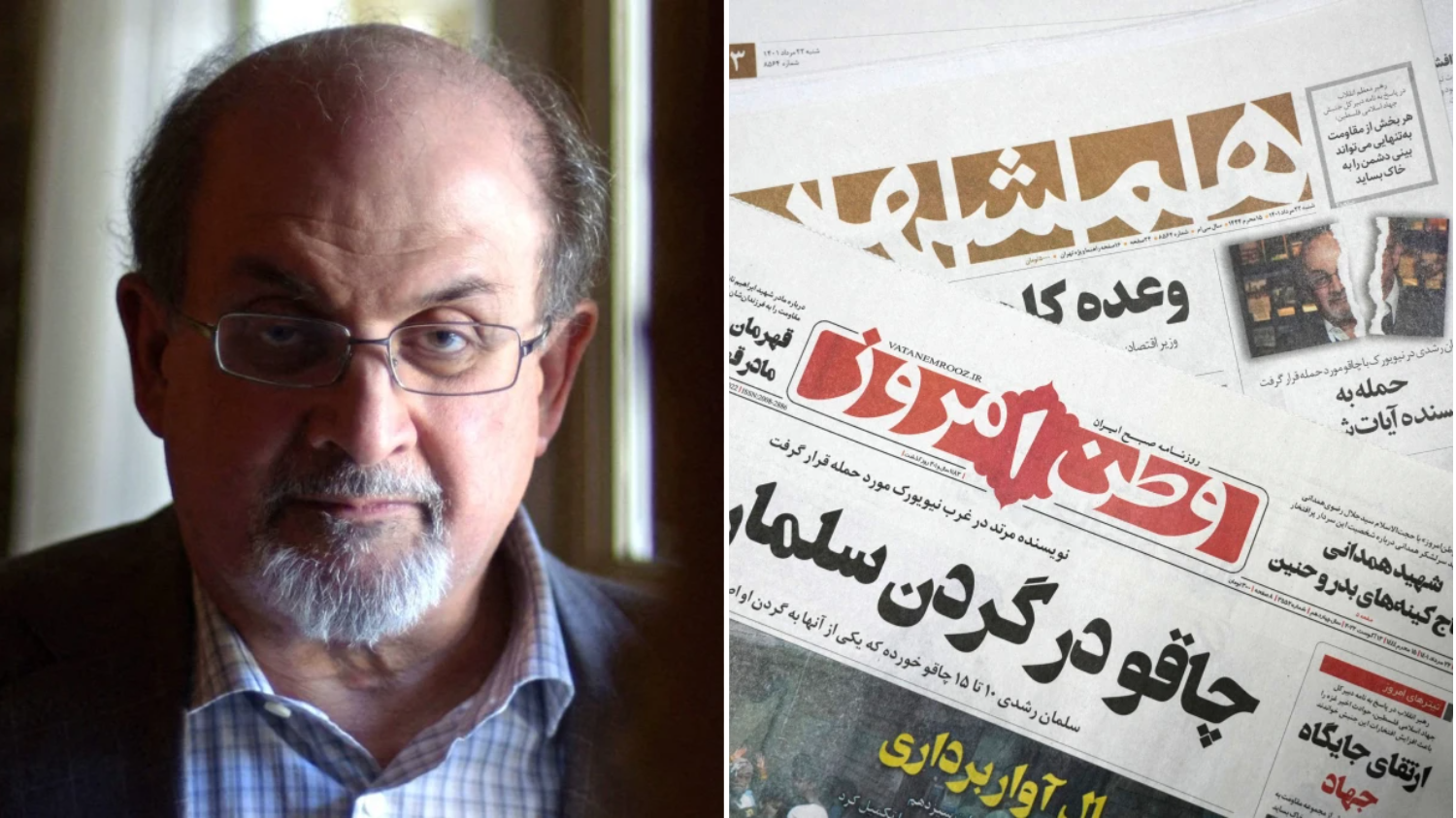 ‘They have a great appetite and have easily sourced what is available to them in the reserve. ‘

He continued: ‘They have bonded well as a herd.

‘The matriarch is fully in charge, we have seen her leading the two calves to water and encouraging them to explore their new surroundings.

‘The hierarchy has been established with one of the young female showing dominance over the more timid female who has one horn. That said, when the more dominant calf is being overly pushy, the matriarch steps in – there is some parenting going on there!

‘We could not have asked for better individuals, they are everything we hoped for and have settled in so well.’