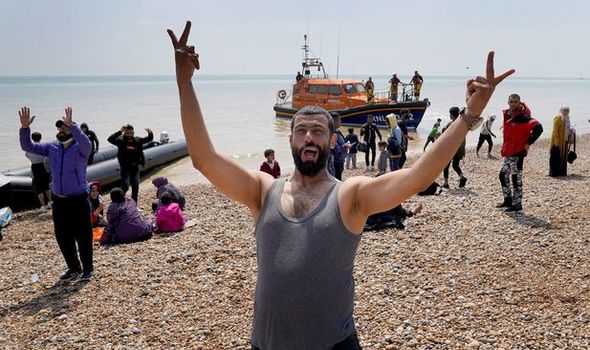 The Justice Secretary has promised to repair our “broken” immigration system by prioritising those who need refuge and ejecting those who don’t.

MPs will today vote on the Nationality and Borders Bill, part of which will make it impossible for criminals to cheat the system by launching appeals simply to delay deportation and prolong their stay.

Writing for the Daily Express, Mr Buckland said: “This country’s asylum system is broken and our New Plan for Immigration will fix it.

“Make no mistake, we will maintain our proud tradition of supporting those in need. Legal immigration has enriched our society and we will continue to support refugees escaping danger around the world.

“At its heart, this reform is all about fairness which I know readers of the Daily Express will support.”

He spoke as nearly 100 migrants were pictured landing in dinghies at Dungeness in Kent yesterday.

The new legislation will end a taxpayer-funded scandal that has seen the Government left impotent and unable to remove hundreds of illegal immigrants and foreign criminals.

In one case a Jamaican drug dealer whose deportation was halted by a last-minute appeal was then freed from custody by a judge.

The criminal, only identifiable as RS, had been due to board a Home Office flight last December.

He had been jailed for 7½ years for dealing Class A drugs but lawyers successfully argued he should be freed from detention while the Home Office prepared another flight.

The High Court ruled that keeping him locked up was unlawful.

The decision infuriated Home Secretary Priti Patel and strengthened her resolve to sort out the mess once and for all. If passed the new laws will include a one-stop process to ensure asylum, human rights claims, and any other protection matters are made and considered together, ahead of an appeal hearing. This will prevent repeated last-minute meritless claims designed to frustrate proper removal.

They would also ensure lawyers who act unreasonably pay back the court costs for the time they wasted.

The Government says the Bill will allow it to clamp down harder on people traffickers who make vast sums sending desperate families across the Channel from France on small boats.

Britain’s bloated asylum budget has doubled in six years to nearly £1billion in 2019-20. This includes millions of pounds on cancelled flights for failed asylum seekers who can stay after legal challenges and £40million a year on legal aid for asylum cases.

A further £400million is spent on housing tens of thousands of asylum seekers and claimants, many of whom have mounted numerous appeals.

The reform is about fairness to the thousands fleeing war, persecution and tyranny, like the 20,000 Syrian refugees we have welcomed into this country.

But it is also about fairness to the British taxpayer who has picked up the bill for an inefficient system for too long.

Every day our immigration tribunals are clogged with cases that judges have heard repeatedly and which have been rejected on multiple occasions. Our new “one-stop” process will stop this cycle of appeals, ensuring claims are considered together in a single assessment early in the process.

This will end the practice of making multiple claims to deliberately prolong an individual’s stay in the UK. As part of this, we are also expanding access to legal aid for victims of human trafficking or modern slavery – making sure they can be identified early and get the support they need as quickly as possible.

We can’t accept abuse of the asylum system and the criminality it brings. A system that has encouraged families and children to put their trust in the hands of organised gangs, and often pay with their lives, has to end.

Our Nationality and Borders Bill represents a sensible solution.

It improves support for refugees in genuine need and strengthens the safe and legal ways to enter the country. It will allow us to clamp down harder on the human traffickers who destroy lives while profiteering from desperation.

Entry into the UK should not be about the ability to pay a people smuggler to travel across the Channel in a small boat. It should be about genuine need of the individual.

This Bill will reform our immigration system for the better. It will support those who are in real need and distress while stopping criminals from exploiting vulnerable people whose lives they jeopardise.

That is why I will be proud to cast my vote to support the National and Borders Bill, prioritise those most in need of protection and fix our broken system.