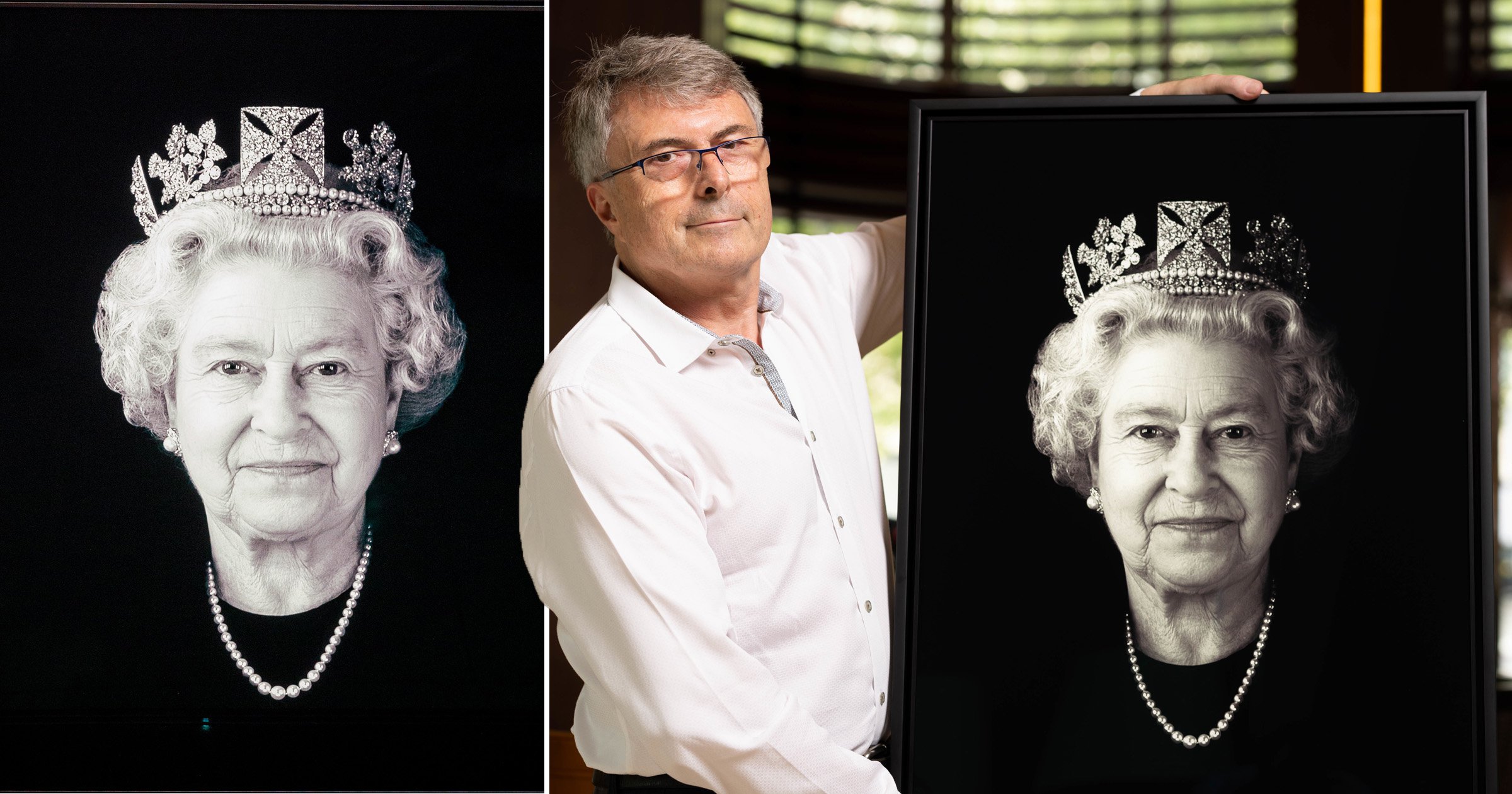 A newly released portrait of the Queen captures the monarch in an off-guard moment after laughing at a joke.

The photograph shows the Queen smiling with a ‘quizzical expression’ on her face and has been unveiled to mark her Platinum Jubilee.

The relaxed test shot by Rob Munday was taken in 2004 during a photographic session to create the first officially commissioned 3D hologram of the Queen.

It then remained noticed in his archives for almost 18-years before he rediscovered it during lockdown last year.

The image captures the Queen reacting to a comment made by her senior dresser and close confidante Angela Kelly, as she rearranged the monarch’s clothing prior to the holographic shoot at Buckingham Palace.

‘The Queen’s daily life is so full of responsibility and duty that it was wonderful to see this fleeting moment of relaxation and pleasure,’ Munday said.

‘It is an uplifting portrait, so different from many of the more sombre portraits commissioned in recent years and a befitting celebration for her Platinum Jubilee.’

The portrait, titled Platinum Queen: Felicity, has been described as capturing ‘the twinkle in the Queen’s eye’ and showing ‘the deep bond and trust’ between her and Ms Kelly.

The image has been dedicated to their 20 years of friendship.

The original holographic portrait of the Queen, titled Equanimity, by artist Chris Levine and holographer Munday, was previously voted visitors’ favourite portrait at the National Portrait Gallery in London.

To create the three-dimensional portrait, more than 10,000 images were made, over the course of two sittings.

The unique image was commissioned by the Jersey Heritage Trust to celebrate 800 years of the island’s loyalty to the Crown.

In 2012, it appeared on a Jersey £100 banknote and featured on the front cover of Time Magazine’s Diamond Jubilee issue.

In it, the Queen wears a white ermine cape, a string of pearls and the famous Diamond Diadem.

Ms Kelly, who is also the Queen’s personal adviser, has, with the monarch’s agreement, written a book about her service.

She shared details of how the Queen shut herself in her sitting room and spent time ‘alone with her own thoughts’ after the Duke of Edinburgh’s funeral.

She also revealed how she became the Queen’s hairdresser while in lockdown as part of HMS Bubble, the nickname given to the reduced household of dedicated royal staff.

Platinum Queen: Felicity was unveiled at the Dorchester Collection’s 45 Park Lane in London at the launch of Munday’s new exhibition of light sculptures called Presence.

The Queen is one of the most depicted women in the world, having sat for numerous painters, photographers and other artists.

Images of the monarch have been created for official purposes, to mark important occasions and anniversaries.]

The National Portrait Gallery alone has more than 960 portraits featuring the Queen during her lifetime.

Mystery of the skeleton hijacked by Nazis and Soviets