Opioid painkillers will have to carry prominent warnings about the risk of addiction, the health secretary has announced.

The move comes amid a massive increase in the number of prescriptions for the painkillers – up by 60% in the last decade to 23 million annually, according to the Department of Health.

It also coincides with a growing number of people becoming dependent on the drugs, something that can have life-changing consequences and even result in death.

Health Secretary Matt Hancock said packaging on common medications such as morphine or fentanyl will now have to carry a warning.

Mr Hancock said: “I have been incredibly concerned by the recent increase in people addicted to opioid drugs.

“Painkillers were a major breakthrough in modern medicine and are hugely important to help people manage pain alongside their busy lives – but they must be treated with caution.

“We know that too much of any painkiller can damage your health, and some opioids are highly addictive and can ruin lives like an illegal drug.

“Things are not as bad here as in America, but we must act now to protect people from the darker side to painkillers.

“We need to place a greater focus on making sure that these medicines are used appropriately and for pain management alone, and make sure people are fully aware of the risks.” 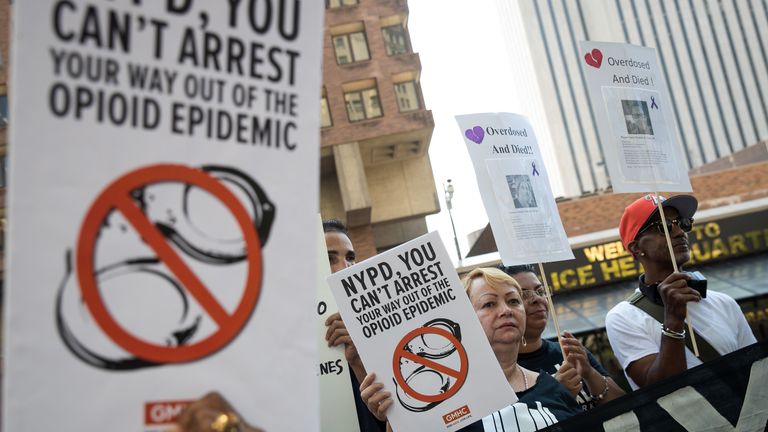 In the US, prescription opioids were a factor in a record 48,000 overdose deaths in 2017, according to the US Centers for Disease Control and Prevention.

That same year, the US declared the opioid crisis a national emergency, estimating that 11.4 million people were misusing prescription painkillers.

Professor Dame Sally Davies, chief medical officer for England, said: “It is vital that anyone who is prescribed strong painkillers takes them only as long as they are suffering from serious pain.

“As soon as the pain starts to alleviate, the drugs have done their job, and it is important to switch to over-the-counter medication like paracetamol which do not carry the same risk of addiction that comes with long-term use.”

It has not yet been decided when the warning will be introduced but a spokesman for the Medicines and Healthcare Products Regulatory Agency said this would be “as quickly as possible… once all the evidence has been assessed”.

They added: “These labelling changes are a first step in a number of regulatory measures being developed.

“It will take a certain amount of time for the new packaging to reach patients.”

It is anticipated the review will be finished later this year.

Red Arrows time today: Where to see the Red Arrows fly in the UK