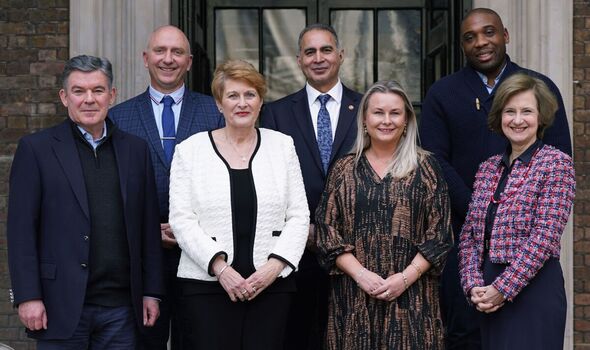 Around 60 per cent of awards go to people who are primarily recognised for their volunteer and charity work in their own communities.

They include 100-year-old Peter Offord Davies, who is awarded a British Empire Medal (BEM) for work as a reading volunteer for primary school children in Macclesfield, Cheshire.

A BEM also goes to Pamela Goldsmith, who has raised £1.5million for cancer charity Macmillan during 20 years of fundraising.

Artist and glassblower John Reyntiens is made a Member of the Order of the British Empire (MBE).

He is best known for his magnificent stained glass window in Westminster Hall celebrating Queen Elizabeth II’s Diamond Jubilee in 2012.

Asrar Ul-Haq, one of Britain’s first Asian police officers, is awarded an Order of the British Empire (OBE) for his tireless efforts to build positive relationships between forces and marginalised communities.

Ben Lindsay, 44, gets an OBE for devoting his life to the service of his community and to end youth violence in South-east London.

Anti-racism campaigner Gee Walker gets an MBE for her outstanding contribution to the fight against racism.

Dr Walker set up the Anthony Walker Foundation in memory of her 18-year old son who was murdered in a savage racist attack in Liverpool in July 2005.

An MBE also goes to Judy Backus, founder of Hidden Help, a charity devoted to supporting disadvantaged families in Cornwall.

TrishaWard-Jones gets a BEM for fundraising efforts on behalf of Promise Dreams, a Wolverhampton-based charity supporting the families of terminally ill children.

The youngest person to receive an honour is Dara Seamus McAnulty, 18, who gets a BEM for environmental work and improving the lives of people with autism spectrum disorder.

They are among 1,107 people on the main honours list released last night. A total of 955 candidates were selected for BEMs, MBEs and OBEs. Women make up half the total list.

It was drawn up following deliberations by 10 independent committees covering a wide area of human endeavour, from sport and the arts to science and political service.

The final selection was made by a main committee, before being signed off by Prime Minister Rishi Sunak and sent to the King for his approval. Sir Hugh Robertson, chair of the sport committee and member of the main committee, said he never signs off a list without wishing he could include many more names.

Norland nanny Louenna Hood, who organised container loads of essential supplies for millions of refugees from Russia’s war on Ukraine, receives a BEM.

Ms Hood, 38, said she is “completely stunned” by the award.

She added: “I started the campaign but I would never have been able to do it without the community.”

She has raised over £170,000 and opened up her home in Cambridgeshire for donations for families fleeing the war to Poland.

Inspector Jim Jones, 52, is to receive a BEM for his work to improve law enforcement’s response to military veterans and to recruit more ex-servicemen and women into the police.

He has been instrumental in changing the way Greater Manchester Police deals with military veterans – either as offenders or people in a mental health crisis.

As a custody sergeant, Mr Jones realised ex-servicemen and women were vulnerable and needed special help.

Instead of referring them to statutory mental health services, he realised they would respond far better if they were dealt with by people who served in the military.

Veterans can come in contact with police during a mental health episode linked to their service or simply because they have not been able to get used to life as a civilian.

Mr Jones said: “Mental health crisis is probably as big as those who commit crime.

“It is only a very, very small minority who don’t transition well and end up coming to our attention.

“They will respond far better to a military charity. If you can send a police officer to deal with a veteran in crisis and that police officer has served, that scenario will de-escalate far more rapidly.”

Cerebral palsy boy (12) gets €10.5m settlement from HSE after suing over birth