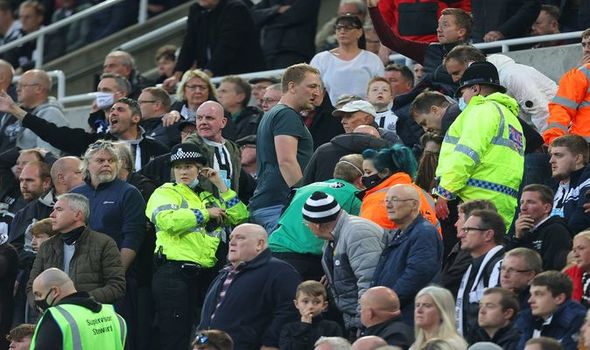 Dr Tom Prichard sprang into action after the elderly man suffered a heart attack at Newcastle United’s match against Spurs on Sunday. Play was suspended for 20 minutes after Newcastle supporters who were near the collapsed fan alerted players and officials to the emergency. A&E consultant Dr Prichard was in the Gallowgate East corner of St James’ Park stadium and raced over to perform CPR, as other medics helped.

The man was revived with a defibrillator brought by Newcastle’s medical team, alerted by Spurs player Eric Dier, and taken to hospital. He was “stable and responsive” yesterday.

Dr Prichard, 34, revealed it was the first time he had performed CPR away from his job: “It’s something you see at work fairly often, but I haven’t really had this outside the hospital before. But there was an elderly gentleman lying out on the seats in cardiac arrest. Luckily St John’s Ambulance were fairly quick and got the defibrillator pads on quickly.

“He was quite fortunate this guy as well because very quickly an intensive care doctor arrived, a cardiologist arrived and we were able to bring him back again.”

Newcastle season ticket holder Dr Prichard was serenaded by supporters chanting “hero” as he returned to his seat when the game resumed – but Spurs won 3-2. He said: “The amount of high fives and handshakes I was getting was unbelievable.

“When 10,000 Geordie fans start chanting ‘hero’ at you it is the best feeling in the world. It was quite emotional and I was welling up, but the most important thing is the fan is ok.

“I don’t want any recognition for this, although a pint with Alan Shearer might be nice.

“As a doctor, what I do want to do is raise awareness of the importance of early CPR and early defibrillation.”

The British Heart Foundation says there are more than 30,000 out-ofhospital cardiac arrests each year, with a survival rate of fewer than one in 10.

Performing CPR correctly can more than double the chances of survival.

Dr Prichard admitted he struggled to focus on the rest of the game and did not sleep on Sunday night. He added: “Early CPR and defibrillation in cardiac arrest is so important.”