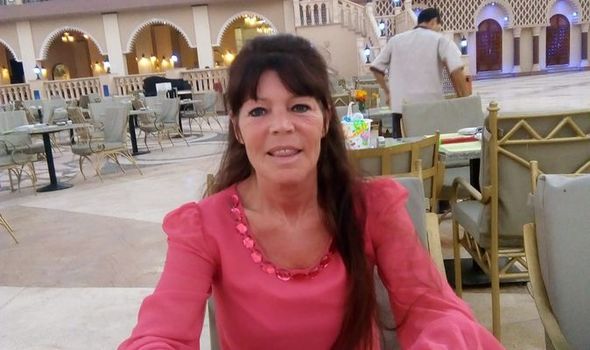 Dawn Walker, 52, from Halifax in West Yorkshire, was married on Wednesday, according to friends. Her body was found in the nearby village of Lightcliffe on Sunday.

In a moving tribute to Dawn, her family said: “We write this with a very heavy heart that yesterday we lost a loving daughter, mother, Nanna, sister, Auntie and friend.

“In circumstances beyond our control, you were taken from us so suddenly.

“We ask at this time as a family, that you respect our privacy and allow us to grieve.”

West Yorkshire Police have arrested a 45-year-old man on suspicion of murder. He remains in custody.

A close friend of Dawn’s told YorkshireLive she was a kind, caring, friendly woman and mother to a little boy.

The friend, who asked not to be named, said Dawn’s body was discovered hidden in a suitcase on a grassy area, later cordoned off by police.

She said: “Dawn was a sound woman. She got married on Wednesday and now this has happened. She was found inside a suitcase at the back of some trees.

“She was friendly and generous. She once paid for a disabled man’s shopping when he was short.”

Family and friends have shared their grief at Dawn’s death on social media with people calling her a “beautiful” and “kind” person.

One woman described her as a “kind caring soul”.

Neighbours have also been devastated by the news, with one elderly woman saying: “I am gobsmacked – there is no other word for it. It is devastating. I have lived here for 40 years and what has happened is just terrible.”

Detective Inspector Amanda Wimbles, of the Homicide and Major Enquiry Team, said: “We would like to reiterate the family’s wishes for privacy at this extremely distressing time and ask for people not to speculate the circumstances regarding Dawn’s death.

DON’T MISS:
Kate and William ‘copy’ Meghan and Harry’s ‘signature style’ [ANALYSIS]
Nicola Sturgeon LOSES IT in interview when asked about life [REVEAL]
Lord Frost’s ‘something for nothing’ noticed after Macron climbdown [REPORT]

“We are continuing to hold a 45-year-old male under arrest in custody at this time as our investigation progresses.”

Police said on Sunday they were not actively seeking any further suspects in connection with Dawn’s death.

Detective Inspector Wimbles said at the time: “We are aware of speculation about this incident on social media and would ask people to be mindful of the impact this may have on the victim’s family.

“This is clearly an extremely distressing time for them and would ask that people refrain from unhelpful comment that may cause unnecessary further upset.”

Officers are appealing for anyone to come forward who witnessed any suspicious activity in the area of Aysgarth Avenue near where Dawn was found or in the surrounding streets between 1pm and 4.38pm on Sunday afternoon.

A person who called the police to report what happened has identified themselves after an appeal, the force said.