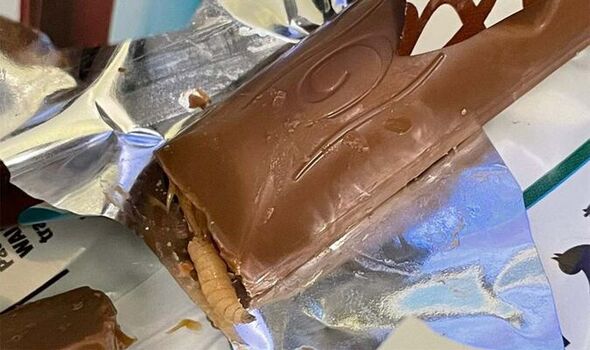 Sharia Monsur, 34, was at work when she decided to tuck into a Salted Caramel Galaxy bar. However, she claims she soon wished she never had, after finding a fly larvae inside – a claim that is fiercely disputed by manufacturer Mars Wrigley.

Sharia said: “I work for the NHS Pandemic Response Service and I work from home, so whilst I was on a Teams meeting with another colleague I decided to grab the chocolate bar so I could eat something quick whilst still working. So I ate the first bar, and usually when I eat my chocolate bars, especially if it is caramel based or anything like that, I always break the little segments and eat it like that.“

Sharia says ate the first bar which she said was “absolutely fine” but then decided to move onto the second bar. Speaking to Coventry Live, she explained that when she broke into the second bar she was alarmed to find a maggot inside.

She said: “It was massive, it was not even a small one, it was like this fat moving live maggot in my chocolate bar. It was disgusting because I have got kids as well, so I thought ‘luckily I break the segments because imagine if my child was to get the chocolate bar and just start biting through it’.

“It was just disgusting. It was not a dead sort of insect on the outside of the packet, it was inside my chocolate bar, it was inside my caramel. It made me feel physically sick because I had just eaten a bar already and I thought ‘what if I had already eaten a maggot and I did not even know?'”

Sharia wrote to Mars Wrigley to inform them of her discovery and was “shocked” by their response. She said they asked for details including where the treat box was purchased from and the conditions the box was kept in, despite her saying that the box was gifted to her.

In the end, the company offered Sharia vouchers for free Galaxy chocolate, however the mum-of-two said that she “does not even want to look at another Galaxy product” after her experience. She added that she has not eaten chocolate since the incident as the experience has “put me off so much”.

Mars Wrigley UK has fiercely denied the claims, stating that the alleged contamination did not happen during the production and packaging process.

A spokesman for the company said: “Mars Wrigley UK has rigorous processes in place to mitigate against the contamination of our products. We have fully investigated this issue and can categorically say that the alleged contamination did not occur during the production and packaging process in the factory.”

‘Do you support Andrew?’ Prince William tight-lipped about his uncle at royal engagement