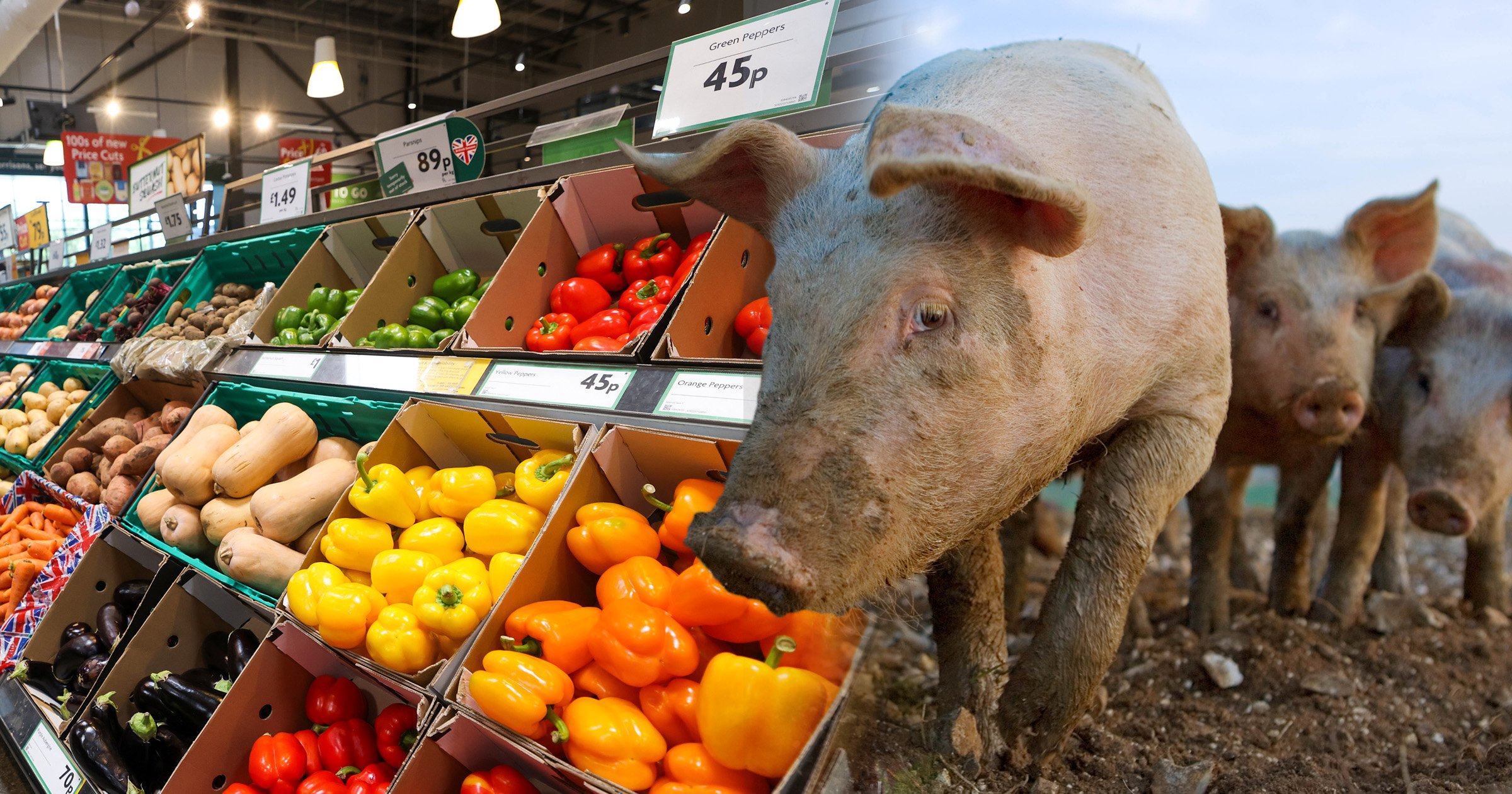 A record number of people are expected to try plant-based foods only this month as growing fears about our health and the climate crisis make Veganuary more popular than ever.

The annual challenge encourages people to cut out meat and dairy during January in the hope of inspiring a move towards veganism for good.

More than two million people in the UK are expected to take part this year – the highest amount since the movement started in 2014.

It’s not hard to see what’s behind the drive: scientists say that going vegan is key to avoiding a future pandemic.

But averting more lockdowns and climate catastrophe are not the only benefits of going vegan.

Dr Shireen Kassam, who founded the Plant Based Health Professionals network, says diet-related illnesses are at an all-time high and going vegan could save the cash-strapped NHS billions.

She pointed to a recent Taiwanese study which found vegetarians have a lower rate of outpatient visits to the doctor because of their healthier diets, which tend to be high in fruit, veg and wholegrains.

This translated into a 15% lower total medical expenditure per person compared with people who eat meat, particularly for chronic illnesses such as high blood pressure, heart disease and depression.

The study concluded that a vegetarian diet ‘may be a hopeful strategy to reduce the medical–economic burden in selected populations’.

Using the Taiwanese study (15%) as a guide, if everyone in the UK cut out meat this could ‘reduce healthcare expenditure by at least £30 billion,’ says DrKassam.

‘The climate crisis really is a health crisis and we can’t detach the two,’ she told Metro.co.uk.

‘Moving towards a plant-based food system is clearly one of the biggest impacts we can have [on the environment], but I think people forget it’s a personal health issue too.’

There have not been any studies comparing the impact of vegan and omnivore diets on the NHS – but it is clearly feeling the crunch of our unhealthy lifestyles.

The Government is spending £6bn a year treating obesity-related ill-health, a figure that is forecast to rise to £10bn a year by 2050.

Britain has one of the highest obesity rates in Europe, with two in three adults overweight or obese.

The scale of the challenge has been highlighted by coronavirus, which disproportionately affects people who are overweight.

What is a vegan diet?

Vegans do not eat foods that come from animals, including dairy products and eggs.

A vegan diet contains only plants and foods made from plants, such as vegetables, grains, nuts and fruits.

The NHS and British Dietetic Association say you can get most of the nutrients you need from eating a varied and balanced vegan diet.

Dr Kassam, a Consultant Haematologist and Lifestyle Physician, said there needs to be far more focus on prevention as the NHS buckles under the unprecedented pressures of the pandemic.

The Government has announced a £100m package to tackle the obesity crisis, which includes plans to introduce a 9pm watershed on TV and a ban on paid-for advertising online for unhealthy food and drink, as well as restrictions on the promotion of unhealthy food in shops.

Dr Kassam believes more needs to be done to promote the benefits of a healthy vegan diet.

Research has linked vegan diets with a reduced risk of catching coronavirus, while a recent study in November found older adults on a plant-based diet required 58% fewer prescription medications than meat-eaters.

These chronic conditions are putting a huge strain on the NHS, but the vast majority ‘need not occur’ or could be reversed.

‘Our every day work is preventable chronic illness,’ saysDr Kassam.

‘Almost 80% of what we do is dedicated to diet and lifestyle-related illnesses that need not occur…and then you’d be left with accidents and emergencies.

‘We’re living 12 years on average in ill health, which requires use of healthcare, and social care.

‘We know that a vegan or vegetarian diet reduces the incidence of heart disease by about 25% and type two diabetes by over 50%. Vegans have a 15% reduction in cancer incidence as well.

‘You’re much more likely to have a normal cholesterol on a vegan diet.

‘Reducing incidence of chronic disease has the knock on effect of usage of healthcare, going to the doctor and medications.’

The London-based doctor acknowledged that a societal shift towards a predominantly plant based food system would require action ‘in every step of the chain’ from policy makers and farmers to supermarkets and advertisers.

But she said that ‘does not negate the impact of personal change’.

‘We could all have our last chicken meal, and never eat meat again and nothing [bad] would happen to us.’

While the number of vegans in the UK is growing, not everyone is convinced of the virtues of a plant-based diet.

The subject remains contentious in the UK, where British food and farming contributes £127 billion to the economy.

British farmers have launched a campaign to promote eating meat and dairy during Veganuary to counteract what they say is ‘misinformation and false truths’ on social media.

The Agricultural and Horticultural Development Board says it wants to ‘give farmers a voice’ amid the push to promote a vegan lifestyle.

Director of Marketing, Liam Byrne, says meat and dairy both contain vitamin B12, ‘an essential nutrient not naturally present in foods of plant origin, so adding a little meat or dairy to your vegetables will boost the number of vitamins in your meal’.

How much red and processed meat should we eat?

The NHS says red meat (such as beef, lamb and pork) can form part of a healthy diet. But eating a lot of red and processed meat probably increases your risk of bowel cancer.

Processed meat refers to meat that has been preserved by smoking, curing, salting or adding preservatives. This includes sausages, bacon, ham, salami and pâtés.

If you currently eat more than 90g (cooked weight) of red or processed meat a day, the Department of Health and Social Care advises that you cut down to 70g.

90g is equivalent to around 3 thinly cut slices of beef, lamb or pork, where each slice is about the size of half a piece of sliced bread. A cooked breakfast containing 2 typical British sausages and 2 rashers of bacon is equivalent to 130g.

For more information, read Red meat and the risk of bowel cancer.

Indeed, experts have spoken out about the risk of a B12 deficiency in those converting to a vegan diet. There is also concern that the mainstream shift to veganism is propping up an already damaging ultra-processed food market.

The vegan boom has been aided by a gold rush in the food industry, with brands from Gregs and McDonalds to Cadbury’s and Marks and Spencer coming up with their own meat-free alternatives.

Frankie Philips, a registered dietician and spokesperson for the British Dietetic Association (BDA), says vegan diets won’t ‘necessarily always be a healthier option’ and it is important to check the nutrient labels on plant-based alternatives.

‘A vegan diet could be a bowl of chips and alternative cheese.’

Philips said it is ‘very true’ that a healthy balanced diet high in fruit and veg can reduce the risk of cancers, diabetes and other illnesses.

But whether that means a vegetarian, vegan or omnivore diet ‘is very much a personal choice’.

‘You can have a healthy diet which is vegan or flexitarian and still have some meat.

‘It all boils down to this whole idea of balance and eating the correct portion sizes.

She urged anyone considering going fully vegan to do their research, plan their meals and make sure they address potential nutrient deficiencies either through supplements or fortified foods.

Heather Russell, of the vegan society, added that well-planned vegan diets ‘can support healthy living in people of all ages’ and anyone looking for vegan-friendly tips about nutritional planning during Veganuary and beyond can find information at the Vegan Society website.

Dr Kassam acknowledged the criticism that veganism is becoming a ‘diet of ultra-processed food’ but said that is ‘no different to the omnivore issue’.

Our shopping habits in the UK are some of the unhealthiest in Europe, with ultra-processed food making up around 50% of what we put in our baskets.

She said: ‘A healthy vegan diet is centring your diet around whole plant foods. That’s fruits, vegetables, wholegrains, beans, nuts and seeds, mainly water for thirst but tea and coffee is fine if you enjoy it.

‘It’s also about having variety and abundance and using lots of herbs and spices.

‘And that’s obviously in contrast to the usual sort of British way of eating, which has become a processed to ultra-processed diet.’

William, Kate and their children in new picture for Cambridge's Christmas card