Ms Brand made the comments on BBC Radio 4’s comedy programme Heresy, an outlet the BBC claims is “deliberately provocative as the title implies.” She riffed on last month’s trend of throwing milkshakes at members of the perceived right, including one which targeted the Brexit Party leader himself. Ms Brand joked: “Why bother with a milkshake when you could get some battery acid?”

The comic then went on to immediately make clear she was joking and criticised the milkshake stunts.

“It’s purely a fantasy, but I think milkshakes are pathetic, I honestly do, sorry.”

But Mr Farage was having none of it, taking the opportunity to hit back at the award-winning comic on his LBC show. 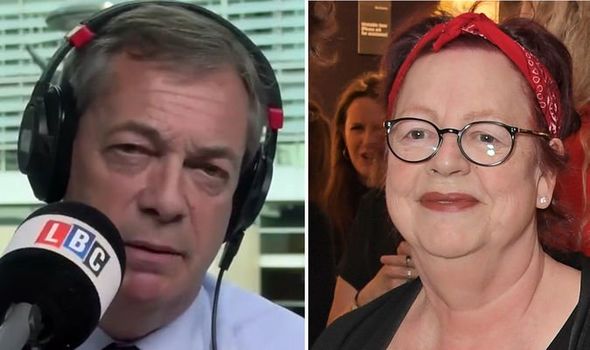 He raged that he was “”pretty tired of overpaid, left-wing, so called comedians appearing on BBC Radio 4.”

He continued: “Well, I think we know fairly clearly who Jo brand was aiming that comment at.

“Or do you think, in the current climate, all that is doing is inciting hate?

“Because I tell you what – a lot of people, like Jo Brand, think the referendum was all a terrible mistake.

“And that they have a view that is morally superior to everybody else’s.

“It seems they believe anything can be used in defence of their arguments.

“This sort of behaviour is completely and utterly disgusting.

“Could you imagine if I was to tell a story like that about somebody on the other side?

“I think the police would knock on my door in 10 minutes.”

The former UKIP leader went one step further when he actively called on police action in a tweet, writing: “This is incitement of violence and the police need to act.”

The show’s host, Victoria Coren Mitchell, had little sympathy, responding: “Nigel! I’m genuinely disappointed; we don’t agree on everything, but I would totally have had you down as a free speech man. Especially when it comes to jokes.”