Nigel Farage outlined how the Brexit Party is funded, revealing it is all done via the website. Mr Farage also made reference to “one big donation”, but refused to disclose the name of the donor. Answering a question on who is funding the Brexit Party, Mr Farage told LBC: “Well that’s the exciting thing, the most fascinating thing is we have done this all via the website. We have now had, and I haven’t got the latest figures, but we’re now over 70,000. So we have over 70,000 people who are now registered supporters of the Brexit Party and they have all paid their £25 online.

Radio host Iain Dale asked: “So it’s just those donations? Have you received other donations?”

Mr Farage revealed: “At this stage we have received one big donation.”

When asked who had made the donation, Mr Farage said it would be “revealed in good time”, but it would “not be fair” to do so now. 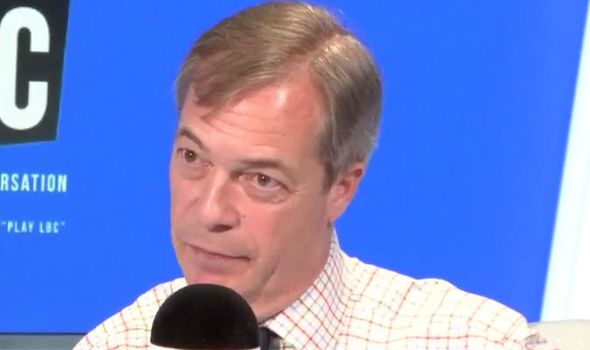 At this stage we have received one big donation

Mr Dale pressed: “Why not? You have to be transparent about donations so why are you being coy?”

Mr Farage said: “And we will be in good time. We have raised £1.8million on the website so far, alright. We have had one donation that we’re still below £2million, alright.

“But now that we’ve raised the seed capital to get the Party off the ground, now is our opportunity to go to some of the bigger donors and ask for help.”

The comments follow Mr Farage’s Brexit Party soaring into a six point lead over the Labour Party, according to recent polls.

In a major blow to Theresa May’s faltering party, the Tories are now down to 13 percent – 15 points behind the Brexit Party.

Labour is currently on 22 percent while Remainers Change UK are tied with the Green Party on 10 points. The Lib Dems have seven percent while Ukip is on five percent.

The YouGov poll was conducted on behalf of Hope Not Hate and sees Ukip rise from last week’s total of 23 percent.

The pollster asked 5,412 people of their European Parliament Voting Intention.

Research was carried out between April 23 and April 26.

A separate Panelbase survey puts the Conservatives and the Brexit Party level on 20 percent, 13 points behind Labour, when don’t knows are excluded.