Nissan is to announce details of a new battery ‘gigafactory’ that will enable its Sunderland car plant to massively increase production of electric vehicles.

The government is thought to have provided some financial support to encourage Nissan‘s investment and ministers are expected to hail it as an endorsement of the UK’s post-Brexit industrial ambitions.

The plant, which could be operational by 2024, would become the largest battery ‘gigafactory’ in the UK.

The term, coined by Tesla founder Elon Musk, comes from the unit of measurement representing billions.

The new plant will be much larger and is expected to have capacity for 6GWh, sufficient to produce batteries for up to 200,000 vehicles a year. 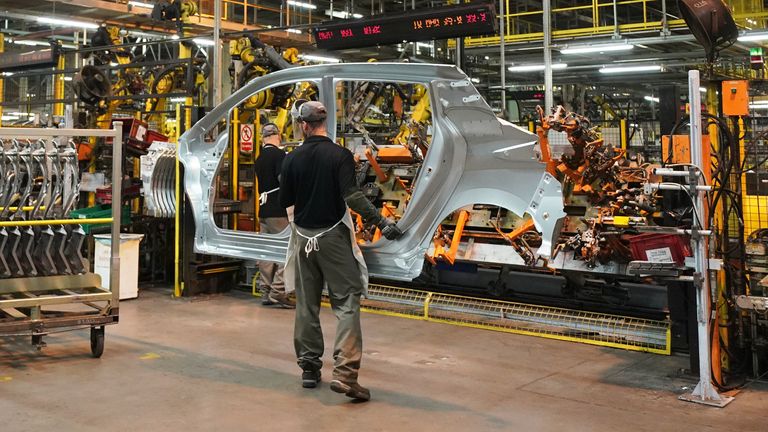 As well as committing to producing long-range Leaf models at Sunderland it is thought Nissan will commit to the full electrification of other models made at the plant including the Qashqai SUV.

The commitment to battery production at the UK’s largest car plant will be a fillip to manufacturing as the industry races to meet the government’s target of banning new petrol and diesel internal combustion engine vehicles by 2030.

UK battery production already lags well behind European competitors Germany and France with only one other gigafactory currently planned.

Britishvolt intends to build a plant on the former Blyth power station site in Northumberland promising 3,000 jobs and batteries for 300,000 vehicles a year.

Nissan believes investing in battery technology post-Brexit will give it a competitive advantage over its rivals.

Listen and subscribe to The Ian King Business Podcast here

New “rules-of-origin” requirements for vehicles set out in the Brexit deal mean that by 2027 vehicles with batteries produced outside the UK or the European Union will attract tariffs when exported to EU states.

By producing them in Sunderland, Nissan will ensure tariff-free access to European markets, as well as avoiding the financial and environmental costs of transporting batteries long distances.

Business secretary Kwasi Kwarteng is in talks with Vauxhall owner Stellantis over securing electric vehicle manufacturing at the company’s Ellesmere Port plant when production of the current ICE Astra ends.

Stellantis says the 2030 ICE ban means making anything other than an electric vehicle at Ellesmere Port would not be viable, but it wants significant support to choose the North West over its other plants in Europe.

COVID-19: Tier 4 film nights and an empty church wedding – how families are spending this Christmas