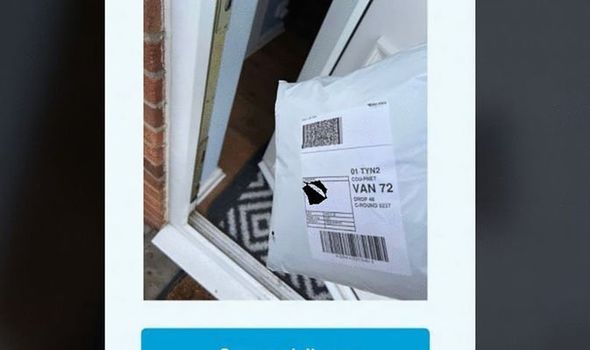 Bizarrely, the driver even took a picture of the package and her open door so he could send it as proof of delivery. The mum, who did not want to be named, took what happened with good humour but added she was “quite surprised he got out alive” because of the dogs in the house.

A spokesperson for Hermes said the incident had been raised with the local team who had spoken to the courier involved.

They said: “It is clearly not acceptable and we will ensure it does not happen again.”

The mum, of Hartlepool, County Durham, said the driver had knocked on her door and, after receiving no answer, had decided to try the handle.

“My partner had been on nights,” she told Teesside Live.

“He was asleep in the front room.

“He heard someone knock at the door. Next thing he knows, he heard the door open and a parcel being flung in.”

She continued: “He’d only been asleep a couple of hours and was still half asleep.

“He said to me ‘you’ll never guess what happened’, and I thought he’d made it up a little bit.

“But when I checked my emails, I saw the driver actually did it.

“He opened the door, took a photo and just flung the parcel.

“I didn’t think they were allowed to do that!

“It could have been a lot worse – we do have a couple of dogs who would’ve ran out given half the chance. They are quite protective.”

The woman says she didn’t know the driver and had not made any previous arrangements about deliveries with the firm.

“It isn’t like we get lots of deliveries. We had another driver but he’d knocked and put [our parcel] behind the gate.

“To be fair, if it was me and I’d caught him, I think I would’ve said something.

“I would probably have been a bit scared if I’d have been on my own.”

The mum did not raise a formal complaint with Hermes.

“I do think with a lot of companies, if they can’t get you, they have to come back and it’s time and money.

“We are not too bothered about it, I thought it was funny more than anything.

“But it’s still not right, if it had been my nana I wouldn’t be happy.”

She said: “Ours was not locked but it wouldn’t have been open.

“There are a lot of people that maybe wouldn’t have been okay with it.”