A court on the Isle of Man heard how McLaughlan braved the perilous 25-mile crossing to reach his girlfriend Jessica Radcliffe despite never having used a jetski before. He admitted arriving unlawfully on the island and was jailed for four weeks. Under the island’s special laws, non-residents need permission to go there. The dad had previously been given permission to work as a roofer on the island for four weeks in September when he met his girlfriend during a night out.

His subsequent application to return was rejected but he decided to make the journey anyway.

Douglas courthouse heard he expected the trip to take 40 minutes instead of nearly five hours.

After he arrived at Ramsey at around 1pm, he walked 15 miles to his girlfriend’s home in Douglas.

The following afternoon, when stopped by a police officer, he gave her address as his own. 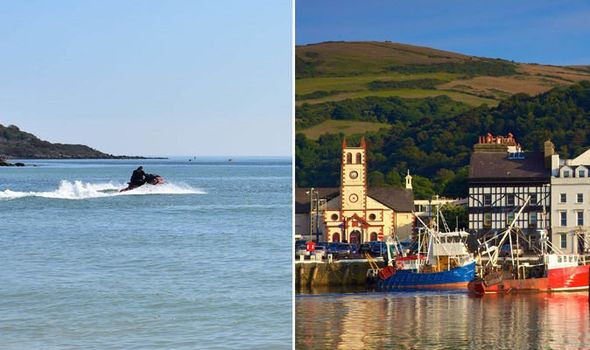 That evening the couple went to two busy nightclubs. After identification checks, police eventually arrested him on Sunday evening. McLaughlan’s defence argued he suffered from depression and was struggling with being unable to see his partner.

Deputy High Bailiff Christopher Arrowsmith said McLaughlan had intentionally tried to get around the island’s restrictions, potentially putting the community at risk.

The journey also put him at “very real risk” of harm.

After an investigation, public health officials said they were “satisfied” there had been no wider risk to the public. McLaughlan’s mum Alison said she had no idea of her son’s exploits until friends messaged her. “I didn’t even know about the jetski,” she said.

“I just don’t know why he did it – he could have killed himself. He’ll be missing his kids over Christmas.”