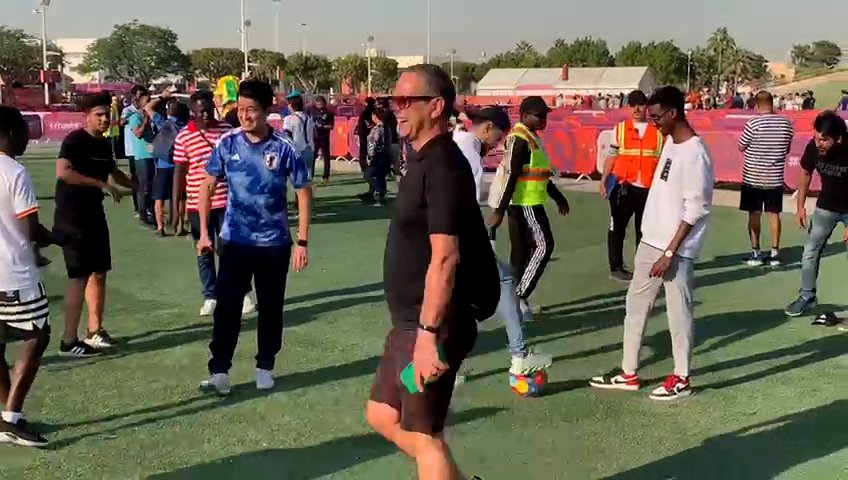 Security officials at the Qatar World Cup have clamped down on…football.

Fans were told off for playing the beautiful game on the grass outside the Khalifa International Stadium in Doha.

World Cup attendees from across the globe had gathered for the fun kickabout this afternoon.

But officials soon intervened and ordered the group to disperse.

One of the youths Mohamed Yunis, 19, from Tunisia told MailOnline: ‘We played happily for only a few minutes. More and more fans joined and then walked off and replaced by others.

‘There were guys from India, Germany, Japan, Mexico and others. Just having a good fun time.’

Kumar Sarraisikan, 22, from Kerela who is studying to be a doctor, added: ‘Football is for everyone. Not just the officials and players, but for the fans too.

‘We caused them no problems, but the Qatar security is ten-fold and then 20-fold no matter where you are in Doha.

‘They spoilt a small game for us. But they do not realise what a cold message that sends to all.’

One security official, who had played a part in stopping the kickabout, also told MailOnline: ‘No football here. Now you go too.’

Qatar authorities previously spurred similar ‘Big Brother’ backlash after they clamped down on beer within stadiums.

The sale of alcohol to fans at World Cup stadiums in Qatar was banned with just two days until the tournament kicked off.

FIFA released a statement on Friday confirming the removal of sales points of beer from the stadium perimeters ‘following discussions between the host country authorities and FIFA’.

Further controversy followed when the World Cup kicked off, with nations told not to wear OneLove armbands.

The rainbow bands signify a show of support and solidarity with the LGBTQ+ community.

Players were told by FIFA that they risked a yellow card if they donned one.

TV pundit and former Lioness and Arsenal player Alex Scott made sure to don one during interviews in Qatar in protest at the decision.

Denmark’s former Prime Minister also decided she had enough of Fifa trying to ban the rainbow from the World Cup.

She was also seen wearing the OneLove armband that has been controversially banned by Fifa as the senior executive with the Danish FA, posed for photos pitchside.

Germany’s national team made a protest against the decision today, covering their mouths before their clash with Japan to signal that they have been silenced.

Who was Alice Keppel? How Camilla is related to King’s former mistress