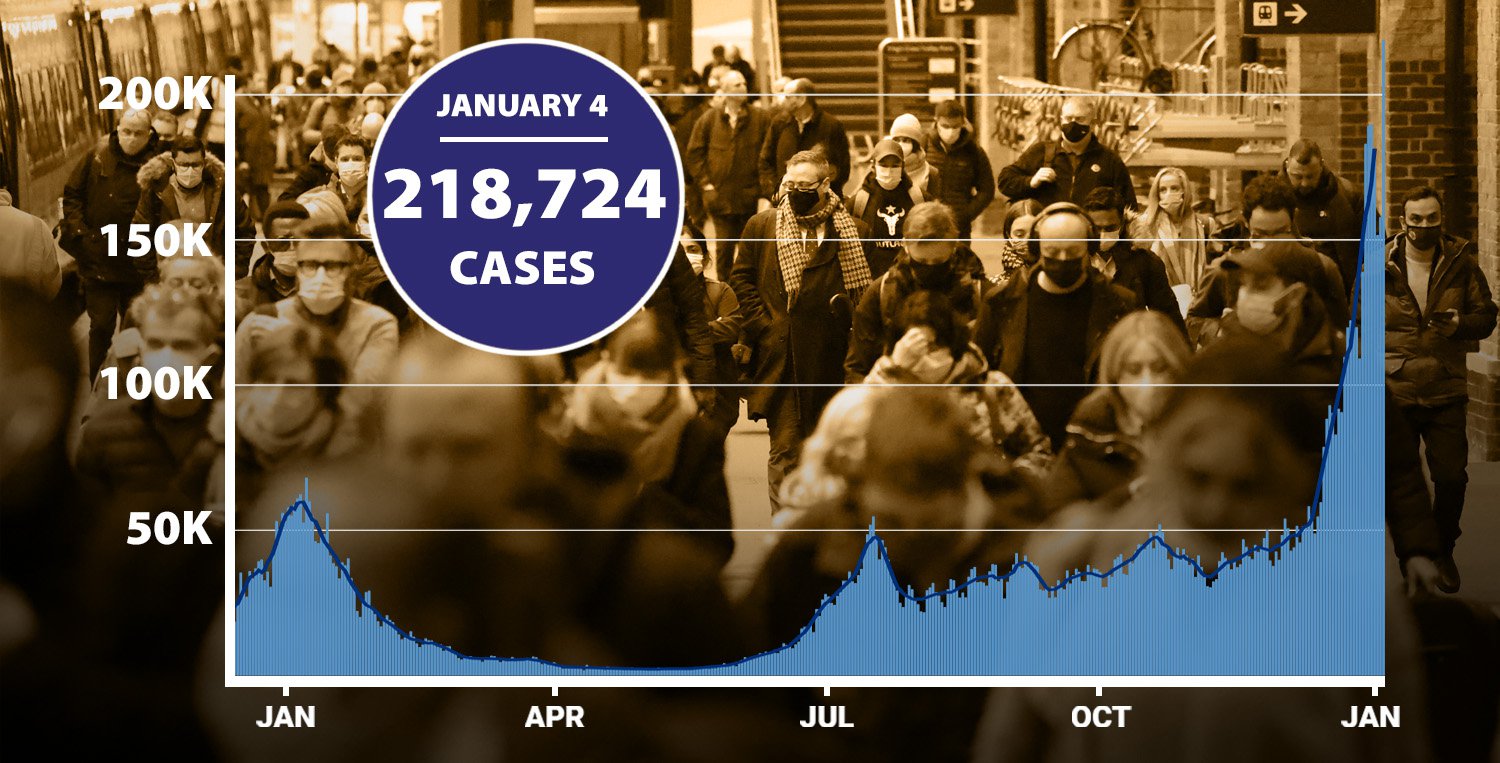 A new daily record of 218,724 daily Covid infections have been recorded in England and Scotland.

It comes as the Omicron variant continues to sweep the UK, adding extra pressure to the NHS and contributing to staff shortages.

Today’s UK wide figures have been released after the Bank Holiday, when only England released data for both deaths and cases.

It’s important to remember that they contain some delayed reporting of cases due to the Christmas holiday period.

Prime Minister Boris Johnson is to hold a press conference from Downing Street at 5pm this afternoon after admitting the health service faces a ‘challenging winter’.

Hospitalisations in the epicentre of London appear to have ‘plateaued’ but other areas are said to be at ‘the foothills’ of the new wave.

While cases are rising far more rapidly, admissions of Covid patients to hospital are still on the rise, with a number of hospitals declaring ‘critical incidents’.

Compared to last week, hospitalisations are up by 51%, with 1,924 new patients admitted to hospital across the past 24 hours.

A total of 15,044 people were in hospital in England with Covid-19 as of 8am this morning – up 58% from a week earlier and the highest number since February 18.

Out of these patients, 797 have needed mechanical ventilation – up 5.1% in the past week.

There were an average of 1,971 admissions per day in England over last week – an increase of 66% compared to the previous seven days.

A further 48 people have died within 28 days of catching coronavirus, bringing the nation’s official death toll to 148,941.

But separate figures from the Office for National Statistics show there have been 174,000 fatalities in the UK where Covid-19 was mentioned on the death certificate.

Today’s figures bring the total number of confirmed cases since the pandemic began to 13,641,520.

The PM is set to hold a crunch cabinet meeting as England’s current Covid restrictions face an official review tomorrow.

She added: ‘It’s important we do follow the data, we’ve done that all along and we’ll continue to do that.’

But nonetheless there are ‘unprecedented’ health worker shortages, while staff still able to come in are ‘exhausted’ after giving up their days off, the chief executive of the NHS Confederation has warned.

In a letter to Health Secretary Sajid Javid, the Royal College of Nursing (RCN) said the NHS could ‘ill afford’ the current level of staff absences as it called for a ‘more cautious approach’ to restrictions in England.

But the Prime Minister’s official spokesman said: ‘We’re not seeing that same jump in beds requiring ventilation, which is pleasing, and almost certainly a function of both the nature of Omicron and our successful booster programme.’

He said vaccinations and ‘evidence that Omicron may be milder’ than previous strains of Covid means ‘we are not seeing those huge waves in cases translate into those needing the most serious care that we saw perhaps in previous waves’.

However he still noted that the current rise is putting the NHS ‘under significant pressure’.

The Health Secretary added: ‘I think Plan B, implementing that, has been the right approach and also being absolutely focused on the vaccination programme.’