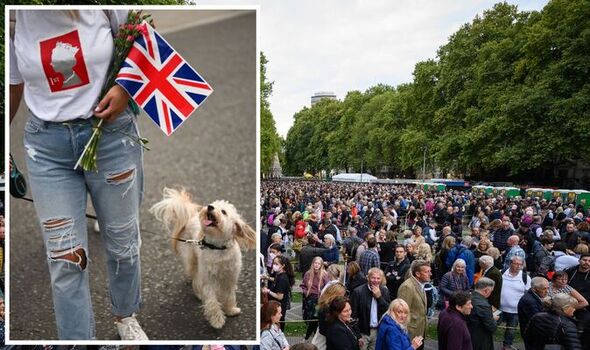 Officials have stopped six people attempting to sneak their pet dogs into Westminster Hall to see the Queen lying in state – according to reports. Jason Groves, political editor at the Daily Mail, wrote on Twitter: “Parliamentary source says officials have stopped six people trying to smuggle their pet dogs into Westminster Hall under their coats for the Queen’s lying in state.” Queues to see Her Majesty appear to be growing quickly, with routes now stretching to 4.9 miles long according to the government’s live tracker.

People are being warned to “dress appropriately” as people could be queuing for more than a day.

The Queen is now lying in state at Westminster Hall after being taken from Buckingham Palace yesterday as part of a procession.

Shop assistant Angela Johnson, 42, of Ealing, west London, was determined to make it to Westminster Hall to pay her respects to the Queen.

She said: “It has been 70 years and she came to the throne at such a young age. It has been a real achievement. We should be proud of our Queen. She has done well for our country and she has never let the country down. She pretty much had to give up her whole life to the country to become Queen – it couldn’t have been easy for her.”

Animals and pets are not allowed in to the vigil, but according to reports some people have been attempting to sneak their beloved pooches in under their coats.

Queues to meet the Queen are expected to be hours long for the next few days before the late monarch’s state funeral on Monday.

Ambulance teams were said to have already treated 291 members of the public along the route of the queue and in surrounding areas on Wednesday.

An LAS spokeswoman said: “Working with our partners, we cared for 291 patients yesterday up until midnight along the lying-in-state queuing route and surrounding areas, including Hyde Park, Whitehall and Millbank.” 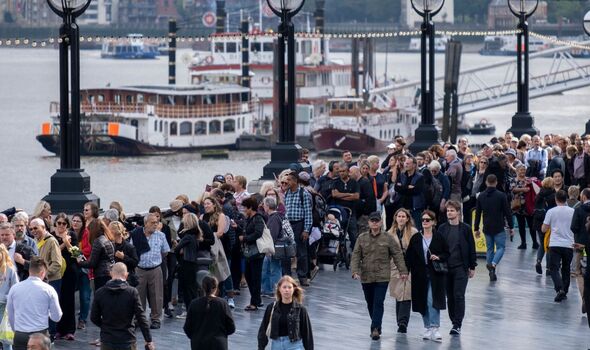 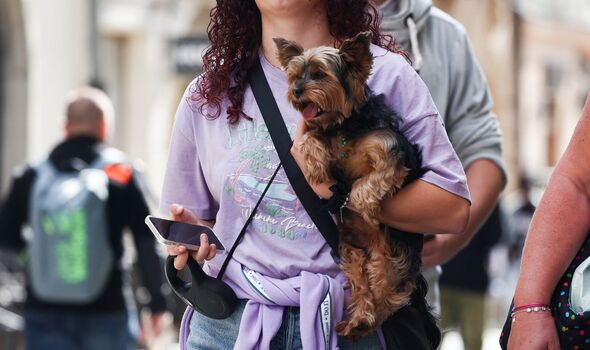 The government website advises: “Please do not bring pets or other animals as you will not be allowed to enter with them. Animals are not permitted in the Palace of Westminster, except guide dogs, hearing dogs and other official assistance dogs.”

There are also a number of other prohibited items, including bags larger than 40cm x 30cm x 20cm in size and food and liquid.

Brits are being told to leave flowers and tribute items in the dedicated floral tribute area in Green Park as these items can not be taken into the Palace of Westminster.

Seating equipment is also prohibited, despite a large number of queuers bringing camping chairs to help aid with the long waits. 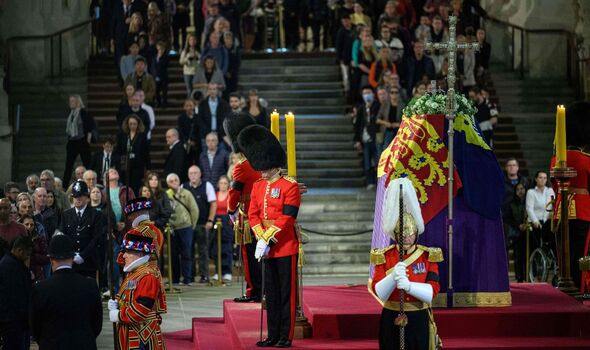 Tourist Mr Neussbaum, who arrived in the UK on Wednesday, had just finished a walking tour in central London when he managed to join the queue in Blackfriars, south London, on Thursday afternoon.

He told PA: “I was thinking that even if I did not get there to Westminster, and it turned out to be too far for me to walk, that I was still paying my last respects to the Queen. I just continued for five-and-a-half hours and to see it through makes me feel fulfilled.

“My wife Shari – who is back in Canada – is the biggest fan of Queen Elizabeth. I figured that if my wife were here, she would want me to continue. The Queen is an inspiration not just to myself but the entire world.”