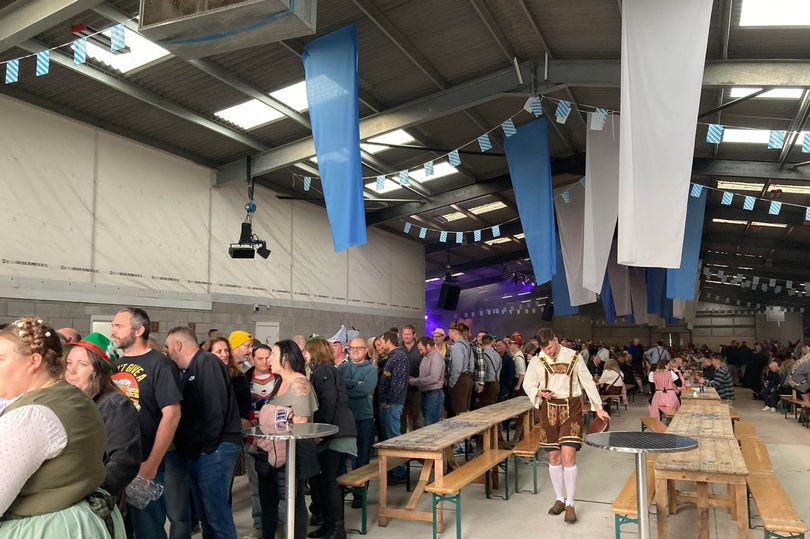 On Oktoberfest event in Wales has been ridiculed after queues were so long people walked out.

People described the evening at the Anglesey show ground as an unmitigated and embarrassing.

Mazzy Moo said: ‘I am so angry about tonight. We queued for an hour to get in the barn in the freeeezing cold. 17.15-1815 finally got in and were told it was an hour and a half queue for the bar, so we left.

‘So many people went straight in and then immediately out because of it. I won’t be the only one, but I expect a refund for mine and my husband’s ticket. What a waste of an evening!’

Christopher Davies said: ‘The running joke was that, as soon as you reached the front of the queue, you had to rejoin at the back, otherwise you’d be sober by the time you got to the next stein.

‘As I was leaving, people were turning up and leaving straight away as they were being told it was a two hour wait for drinks, instead opting to head to Menai Bridge to the pub instead.’

Belinda Woodward said: ‘How embarrassing for a beer festival to make people wait and an hour and a half for beer! We queued for an hour and a half to get in thinking we would be OK for drinks as we had a table with table service…… oh wait no! They stopped table service as the demand on the bar was too much! Our table will be expecting a full refund.’

Stuart Kynaston said: ‘One of the worst organised events I’ve ever been to. If I was the organiser I’d be embarrassed. Queues of over an hour to get a beer. At a beer festival. Quite literally couldn’t organise a p*** up in a barn.’

The organisers of the event acknowledged it was ‘not perfect’ said they would be ‘taking forward some important lessons’.

Organisers Oktoberfest UK said security searches slowed down the process for getting into the venue.

They said: ‘If we were to do it again we would introduce an additional queueing system by using more than one entrance to speed up the process.’

Addressing the wait at the bar, they said there were technical issues that stopped them getting drinks out fast enough at the start of the event.

They added: ‘Working with new suppliers in a new location always comes with its challenges and while we are grateful for the hard work put in by everyone on the bar, we have bought our relationship with them to a close today with immediate effect.

‘As a team we all pulled together to help and worked at full capacity until the queue had been completely serviced.’