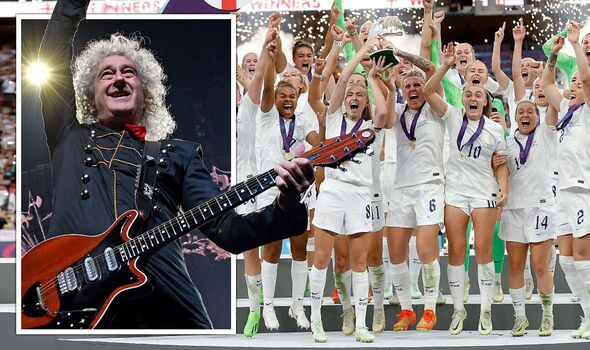 Four players who helped lift the women’s Euro 2022 football trophy with their stunning 2-1 victory over Germany are recognised. Captain Leah Williamson, 25, is made an OBE and there are MBEs for Lucy Bronze, 31, Beth Mead, 27, and Ellen White, 33.

There are OBEs for This Is England actor Stephen Graham, 49, and for broadcaster and cot-death campaigner Anne Diamond, 68.

Countdown’s Rachel Riley, 36, gets an MBE for her work to raise awareness of the Holocaust and combat anti-Semitism.

The Lionesses’ triumphant summer campaign brought sporting joy to the nation, following the misery of lockdown.

Beth’s MBE caps a triumphant year, which saw her voted BBC Sports Personality of the Year.

He said: “The first reaction, I suppose, is ‘Oh my God’, because it’s a shock. I don’t think I expected it because I haven’t been conducting the kind of life which I thought would lead to a knighthood – I’ve been quite vociferous in criticising recent governments for a start.

“I couldn’t have imagined this 50 years ago, when we were kind of hacking out a living and trying to put our music into the world.”

Brian, married to ex-EastEnders actress Anita Dobson, famously played a rock version of the national anthem on the roof of Buckingham Palace for Queen Elizabeth’s Golden Jubilee in 2002. He is also an accomplished scientist with a PhD in astrophysics.

Frank, awarded an MBE under his real name, Christopher Collins, revealed he had yet to tell his loved ones – as he feared he had been given the gong by mistake.

He said: “I deal mainly in laughs and applause and they disappear into the air quite quickly.

“So getting a proper medal that you can hold on to and polish regularly has given my career a sense of permanence that I like.”

Turner Prize winner Grayson is knighted for his contribution to art over the past 40 years.

Virginia starred in hit films including The Cruel Sea, A Town Like Alice, Carve Her Name With Pride and Ring Of Bright Water.

But she is best remembered by movie fans for her role as Joy Adamson in the 1966 true-life film Born Free, which also co-starred her husband, Bill Travers.

It told the story of how Joy and George Adamson raised Elsa, an orphaned lion cub, before releasing her into the wild in Kenya.

Dame Virginia is honoured for services to wildlife conservation and animal welfare.

She said: “This award may be in my name, but I feel it really belongs to all those striving to end wild animal suffering and keep wildlife in the wild.”

Her boutique Bazaar, in Chelsea’s King’s Road, became a magnet for young people in the 1960s.

There is also a damehood for heptathlete Denise Lewis, 50, who won gold in the 2000 Sydney Olympics and is president of Commonwealth Games England. She said: “I’m still totally blown away. I can’t even process it. It’s an incredible honour.”

Legendary Tottenham Hotspur and Arsenal goalkeeper Pat Jennings, 77, is made a CBE for charity work in his native Northern Ireland.

Former footballer and manager Chris Kamara, 65, receives an MBE for his services to charity
and anti-racism.

It comes weeks after he revealed he was battling apraxia of speech, which has cut short his career as a TV pundit.

Scotland captain and Liverpool player Andy Robertson, 28, gets an MBE for his work with young people.

However, there is no award for Lioness Chloe Kelly, 24, who scored the winner in July’s Euros final, or team-mate Ella Toone, 23, who got the first goal.

Honours sport committee chairman, Sir Hugh Robertson, said: “When you have events like this, there is a danger of sort of ‘carpet bombing’ the entire squad so people who have only been on the pitch for five minutes get an award.

“We have tried to stick to the principles of the honours system, which is to recognise excellence and extraordinary contributions.”

Sir Hugh said the Euros had “set the country alight” and “we wanted to recognise and capture that and do it in a way that tried to pick out the really outstanding performances we had seen across that tournament”.

There is an MBE for Francesca Simon, 67, author of the Horrid Henry series of children’s books. And DJ Spoony, 52, whose real name is Johnathan Joseph, gets a BEM for charity work.

Journalist Catherine Belton, who was sued by Russian oligarch Roman Abramovich over claims of his close relationship with Vladimir Putin, is made an MBE.

Artist David Sutherland, who has illustrated the Beano comic for 60 years, is awarded an OBE.

The organisers of Queen Elizabeth’s state funeral are not mentioned on the honours list, as it came too late for them to be considered.

But they are likely to feature in King Charles’ first Birthday Honours list next year, along with Ukraine’s president Volodymyr Zelensky – who is thought to be in line for an honorary knighthood.

Britain’s first female hijab-wearing football referee has been awarded an MBE for services to the game.

Jawahir Roble, 26, grew up playing on the streets of war-torn Mogadishu in Somalia before moving to Wembley, north London, when she was 10.

The soccer-mad young girl played football with her eight siblings “in the garden, in the house, outside, everywhere”.

She later volunteered for Football Beyond Borders and set up the charity’s first women’s team and qualified as a referee.

Her dream is to encourage more Muslim girls to play football, which she regards as a “sport for everyone”.

She once said: “Who would ever think a black, Somali-born immigrant girl with eight siblings could ref a men’s game in England with a hijab on? Of course, they’re surprised to see a Muslim girl refereeing! I’m short as well so they’re like ‘OK, what is this child doing here?’”

But Jawahir says she takes no nonsense from male players on the pitch.

A former royal aide who made a complaint of bullying against the Duchess of Sussex has been made a Lieutenant of the Royal Victorian Order by the King.

Jason Knauf, 38, worked as communications secretary for Harry and Meghan.

In 2018, he emailed his concerns about her to Prince William’s then private secretary.

The legal team for the Duchess have in the past strenuously denied the allegation.