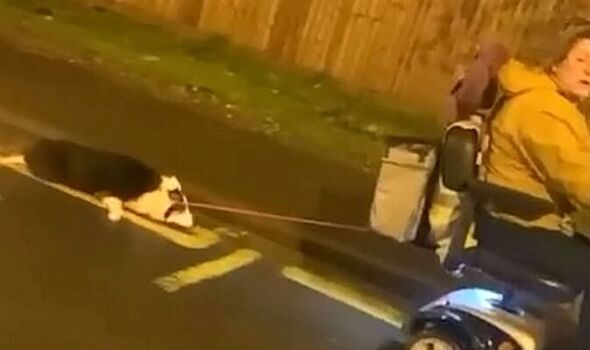 Harrowing images show a dog being dragged along a road by a woman driving a mobility scooter – leaving online viewers furious.

The photographs appear to capture the poor pet struggling as it is pulled along the road. It is reported that a witness shouted at the woman: “You are hurting your dog. The dog’s going to die. You are hitting the kerb.”

The brazen woman even looks at the camera in some shots as she operates the mobility scooter on the road in Erdington, Birmingham.

It is understood that, after bieng challenged, the woman turned away muttering something inaudible and carryied along up the road.

The images were originally shared on Twitter, beside the caption: “Who is this person? This dog needs to be found and rescued.”

One person commented: “Why has no one stopped her?”

Another put: “Has this been reported. It’s horrific.”

A third wrote: “Poor dog. I hope they find the lady driving and take the dog off her.”

One said “absolutely disgusting. I really hope the Dog is ok” and another simply added: “That’s sickening.”

The RSPCA confirmed it has launched an investigation into the “shocking” incident.

An spokesperson for the animal welfare charity said: “This video is very shocking to see. It has been brought to our attention and is now being looked into by our experienced officers.

“Anyone with any first-hand information about the incident should call our emergency line on 0300 1234 999.”

It comes after five newborn puppies were rescued after being dumped in a cardboard box at a sports ground in Cockfosters, north London this week.

The pups were so young their eyes were closed and they still had their umbilical cords attached.