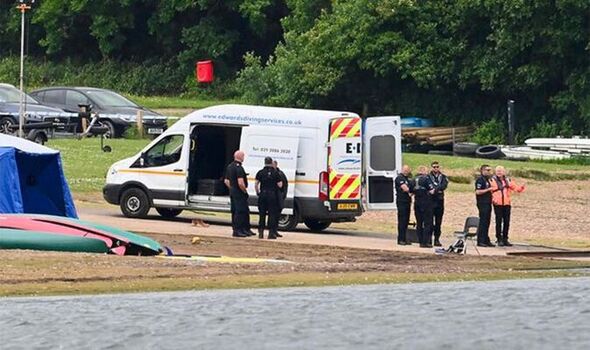 Six people were in the vessel when it overturned on Roadford Lake, Devon, on Wednesday, of which four were rescued with two sent to hospital for further treatment. One person has since been discharged and another remains in a critical condition.

A major operation using specialist equipment and resources in and over the water, on land, and with drones continued yesterday before it was announced the two bodies had been found.

According to the Mirror, the Marine Accident Investigation Branch (MAIB) has opened a probe into the incident, saying the motor boat was carrying “two disabled persons”.

In a statement released before the discovery of the two bodies, the MAIB said: “Capsize of a motor vessel on Roadford Lake in Devon, England.

“The vessel was carrying six occupants, four have been rescued but two disabled persons still remain unaccounted for.”

It is also understood hat two people were “strapped into wheelchairs” on the boat.

A source told Metro: “The two people that are missing were strapped into their wheelchairs.

“This is a recovery job for the police divers. They would not have stood a chance.”

Formal identification is yet to take place and the families of the two missing people have been informed of the development. They are being supported by specially-trained officers, said police.

Chief Superintendent Dan Evans said: “This is an extremely distressing incident and our thoughts are with all of those involved and their loved ones, who we are working closely with to offer help and support wherever we can.

“Every effort has been made to locate the two people who remained unaccounted for as fast as possible.

“Tragically, we can confirm that the bodies of two people were located and recovered. Our priority is to support their families.”

A large-scale response from emergency services was launched at around 1.30pm on Wednesday.

Police, fire and ambulance services, the air ambulance, HM Coastguard and search and rescue teams all attended the scene.

The 730 acre (1.9 square mile) lake has been a reservoir since 1989 and supplies water to Plymouth and other parts of south Devon. It is often used by people kayaking, canoeing, paddle boarding and sailing.

Old phone to recycle? In France, just drop it in the mail