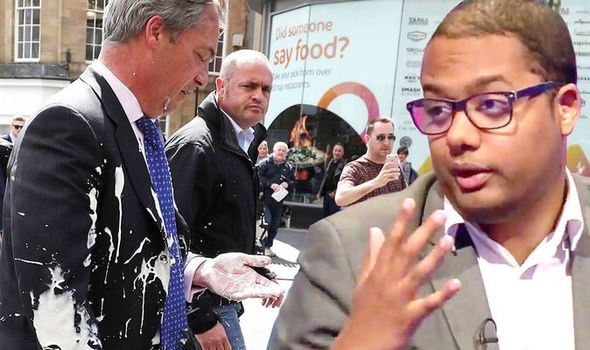 Mr Bush was appearing on BBC Newsnight when he said it was “a bit hysterical” to compare milkshake being thrown at someone to the end of democracy. His comments came after Mr Farage was struck by a milkshake while out walking on a Brexit Party demonstration in Newcastle on Monday. The Brexit Party leader said the attack, and like incidents on other politicians, were an “affront to democracy”.

But responding to Mr Farage’s comments, Mr Bush said: “It’s a bit hysterical to suggest that throwing food at someone is the end of democracy.

“Or is analogous to the very real death threats against various politicians including, it must be said, against Nigel Farage.”

But social media users were quick to support Mr Farage and take aim at Mr Bush. 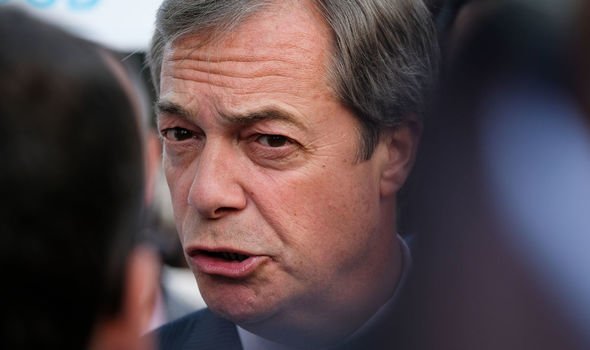 “Voting has now become a farce.”

Another said on Twitter: “I’ve not seen anyone say “it’s the end of democracy” or that throwing a milkshake at a party leader is “analogous” to death threats.

“We just want a society where politicians can walk through our towns in safety.”

Before the show aired, Mr Farage said that civility has broken down in Britain among some Remainers who refuse to accept the result of the 2016 referendum. 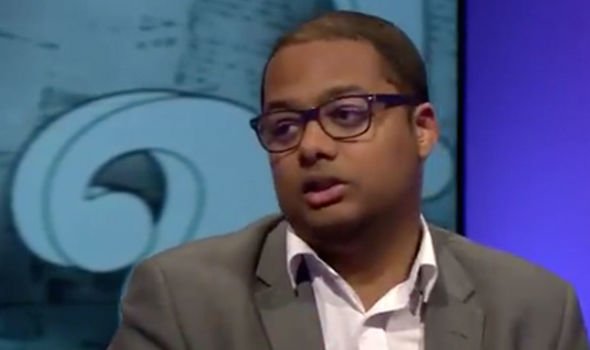 Both Theresa May and Tony Blair condemned the assault which the former Labour Prime Minister described as “horrible and ridiculous”.

The throwing of milkshakes at, mainly right-wing, politicians has become a theme of the European elections campaign in the UK.

Protesters are thought to have switched to using the drinks as a weapon as they are easier to carry than eggs without arousing suspicion.

Mr Farage, whose party is expected to triumph in Thursday’s vote, was plastered with the banana-flavoured drink after shaking hands with voters in Newcastle city centre.