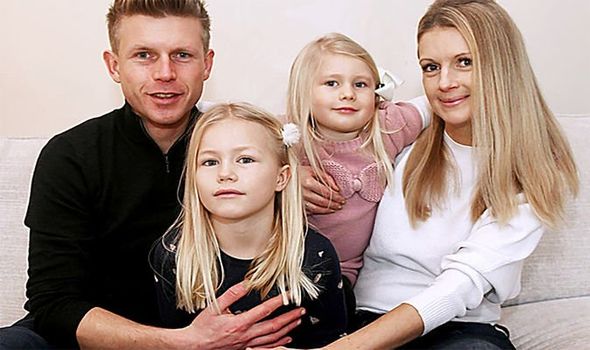 Eight-year-old Amelie Round suffers from hereditary spastic paraplegia, a degenerative disorder that prevents her from walking unaided.

But after years of struggling, she has now been offered lifechanging surgery in the US – at a cost of £100,000.

It means Amelie, who has set her heart on being a bridesmaid with sister Saphie, four, could see her dream become reality.

Parents Rose Moore, 37, and Jay Round, 39, from Hessay, York, plan to celebrate their 10th anniversary by renewing their wedding vows.

Rose said: “After the surgery, the hope is the girls would be bridesmaids. Amelie could independently walk down the aisle, which is something she couldn’t do now.”

Until Amelie was 18 months, the couple believed she was developing normally. However the youngster did not walk like her friends and appeared very unsteady on her feet, prompting a long road of tests and invasive investigations. She was given the devastating diagnosis aged just four of lifelong disorder HSP.

Rose said: “It’s a rare condition that affects only around 0.005 percent of the population” “It affects her lower body muscles, causing them to be tight and weak. It makes it incredibly difficult for her to walk and balance is a real struggle. If I leave her for a second, she just falls.

“She also has weak motor skills. There isn’t one thing which is easy for her.”

Rose added: “It’s really exhausting because we have to watch her constantly.”

But hope has come in the form of an offer of surgery – unavailable in the UK – at St Louis Children’s Hospital in Missouri.

Doctors there are confident the operation will change her life for the better.

Rose added: “For a lot of children it’s absolutely life-changing and has miraculous results.

“Ultimately it’s going to sever the nerves in her spinal cord – the ones telling the muscles to be tight in her legs.

“There will be a long rehabilitation process afterwards, but we are hopeful and optimistic.”

The family have already raised £37,000 towards their £100,000 target – thanks to the family, friends and donors on a GOFUNDME page – but need more money.

London's Heathrow halts flights after sightings of a drone