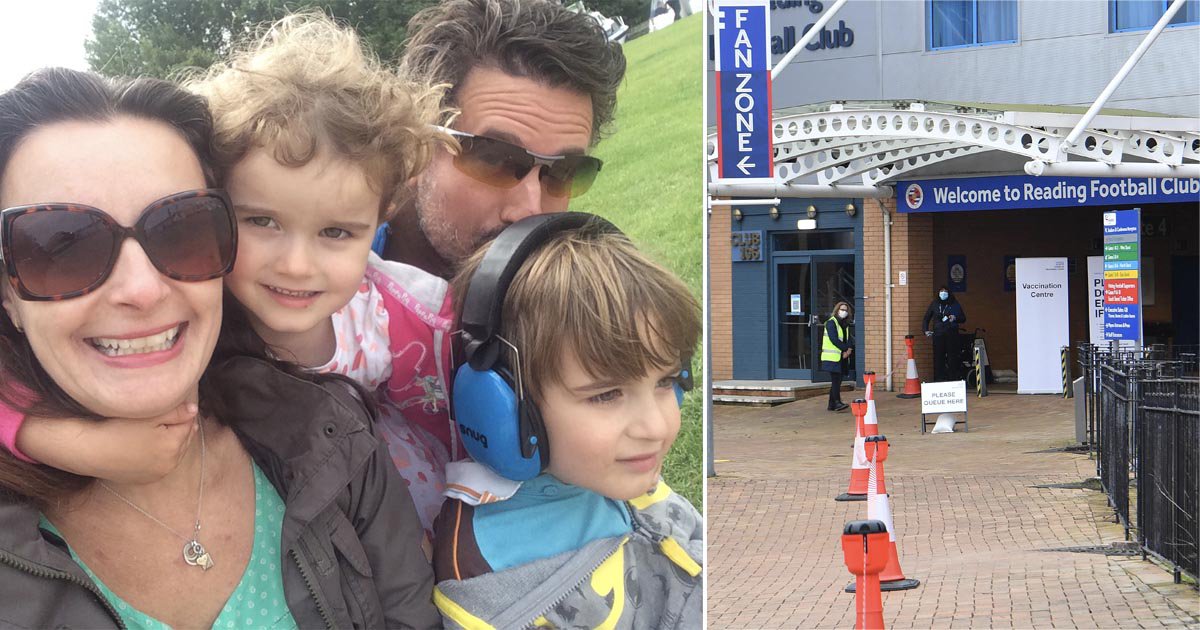 Parents of autistic children have claimed they were refused a coronavirus jab because their kids ‘weren’t disabled enough’.

Two families say they were turned away from a vaccination centre set up at the Madejski Stadium in Reading.

Both claim they had appointments booked in for Monday, March 1, according to BerkshireLive.

One angry dad said it was ‘critical’ he and his wife get the jab as their young son needs round-the-clock care and accused staff of ‘playing God’.

Suzanne was booked in to get her vaccine, but when she arrived was told she could not have the jab.

Mr Robinson, from Caversham, said: ‘It seems like someone there is playing God. The man there told my wife she was the 26th person they have had to turn away.

‘We got our letter and my wife booked in for an appointment on Monday. We should be in group six as parent carers and it is critical we have the jab.

‘Zac needs full-time care, and if he were to get coronavirus it would be terrible for him. He just would not be able to cope with the medical equipment needed if he had to go to the hospital.

‘Also, if one of us got it, there would be no way we could look after him, which makes having the vaccine so important for us.

‘Yet my wife gets a letter, books an appointment and then gets turned away. She’s now had to reschedule at a pharmacy in Tilehurst and won’t get her jab for another three weeks.

‘This is another sign of how little people seem to care for people with learning disabilities.’

Mr Robinson said he was still waiting for an invitation to receive his own jab.

He added that they subsequently called the government’s Covid hotline on 119 and were told they ‘absolutely should’ be eligible for the vaccine and should have been given their inoculations.

The other parent faced with the same ordeal lives in Whitley. His child is less severely autistic than Zac, but still requires full-time care.

The dad, who asked not to be named, claims ‘they told us our children weren’t disabled enough for us to get our vaccines’.

He said: ‘There must have been 20 people turned away when I was there. I’ve got the letter and booked my appointment at the stadium for the vaccine.

‘My son is 17 and is what they call a “high-functioning” autistic. He still needs full-time care though.

‘It got to my appointment time and I’ve basically been told that he’s not ill enough for me to get my vaccine.

‘So there are 20 of us there, who have all been told turned away. All these people have vulnerable children and have made a major effort to get here and then they’re turned away.

‘I don’t know if it’s an error, but we need to vaccinate because if we get ill, or our children get ill, it could lead to very serious consequences.

‘My appointment has not been rescheduled yet and I really hope we don’t end up slipping through the net because of this.’

A spokesperson for Oxford Health NHS Foundation Trust said: ‘We are sorry for the distress and inconvenience experienced by Mr and Mrs Robinson and would ask them to make contact so that we can ensure they can be vaccinated, in line with guidance set out on eligibility by the JCVI.’

Princess Beatrice tragedy: Bea devastated as Eugenie visits Queen in Balmoral without her