PARIS — The suspect in the stabbing of two people outside the former Paris office of the satirical newspaper Charlie Hebdo has confessed and said his attack was directed at the publication because it printed cartoons mocking the Prophet Muhammad, a French judicial official said on Saturday.

Charlie Hebdo’s former office was the target of a January 2015 terrorist attack that killed 12 people after the weekly first published the cartoons. It republished them in early September on the opening day of the trial of 14 people suspected of having links to the 2015 attack.

The stabbing took place during the long-awaited trial of alleged accomplices in the 2015 attack, which has forced France to relive the trauma of a series of terrorist strikes in the past few years.

French authorities have said that the suspect, who was arrested shortly after the attack on Friday, is an 18-year-old Pakistani man who arrived in France three years ago as an unaccompanied minor. Although he was briefly arrested a month ago for carrying a screwdriver, he had not been previously identified as an Islamist radical, France’s interior minister, Gérald Darmanin, told France 2 television on Friday.

The judicial official, who insisted on anonymity because French authorities have not yet publicly confirmed the suspect’s statement, said the man had explained his motives for the attack, which took place next to a mural paying tribute to the victims of the 2015 killings.

French media widely reported on Saturday that the suspect had confessed and linked the attack to Charlie Hebdo. But the government has not made any public statement yet on what motivated him, whether he acted in direct retaliation to the republication of the caricatures, or whether he acted alone or had ties to a terrorist network.

The republication of the caricatures stoked the ire of some Muslims around the world, especially in Pakistan, where demonstrators rallied to condemn Charlie Hebdo. And Al Qaeda responded by calling on people to strike the newspaper.

The attack comes at a politically sensitive time in France as politicians, with an eye toward presidential elections in 2022, are already trying to compete on issues related to crime, immigration and Islam. President Emmanuel Macron is expected to unveil a policy to combat “separatism,’’ focusing on radical Islam, in the next few months.

The suspect’s status as an immigrant could further fuel debates in France over immigration, an issue that has underpinned the rise of the far right politically. Mr. Macron’s main rival in the previous presidential election and his likely challenger in the next one, Marine Le Pen, immediately drew a link between the stabbing and what she has long described as the county’s lax immigration policies.

Many could have avoided becoming victims, she tweeted, if France had “systematically expelled illegals” and “hunted down Islamism.’’

The stabbing adds to the traumas afflicting French society, and again raises questions about competing values in a country that, ethnically and religiously, has been transformed in recent decades.

On Friday, Charlie Hebdo tweeted, “This tragic episode shows us once again that fanaticism, intolerance, the origins of which will be revealed by the investigation, are still present in French society.” 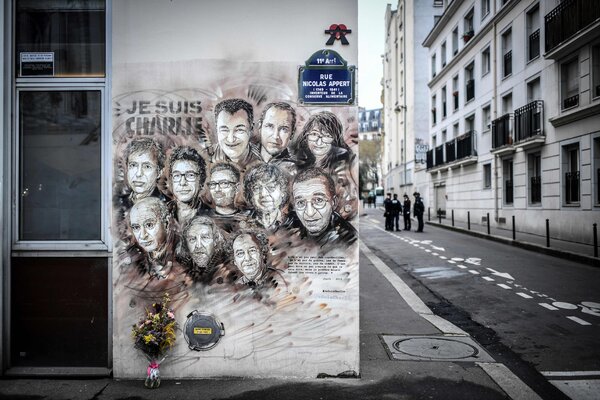 But when Charlie Hebdo’s editors reprinted the drawings early this month, the decision was regarded by some as commitment to free speech but by others as needless provocation.

Images of the Prophet Muhammad are proscribed in Islam, and insulting religion under some countries’ blasphemy laws can carry the death penalty.

Mr. Macron defended the magazine’s “right to blasphemy.’’ But others — overseas but also in France itself — saw the republication as a provocative act that leveled insults at Muslim people.

In the day following the republication, a slogan showing solidarity with the magazine, #IAmStillCharlie, trended on Twitter in France, but was challenged by the opposite, #IAmNotCharlie.

Jean-Charles Brisard, director of the Paris-based Center for the Analysis of Terrorism, said that threats against Charlie Hebdo — which moved to highly secure offices elsewhere after the 2015 attack — had increased in recent months.

The interior minister, Mr. Darmanin, said that the nature of the attack was “an Islamist terrorism modus operandi, obviously, there’s little doubt about that.”

He added that the level of danger in the street of Charlie Hebdo’s former offices had been “underestimated” despite the fact that authorities had not reported any specific threats.

French prosecutors have opened a terrorism investigation and several acquaintances of the main suspect remain in custody — a standard procedure after such an incident. No details were disclosed as to their identities.

Speaking to France 2 on Friday, Luc Hermann, a journalist and filmmaker at Premières Lignes, said that the assailant first struck the woman in her face, then the man, before returning to stab the woman again.

French authorities are concerned about the evolution of terrorist threats on their soil, as they have evolved from organized attacks, such as the November 2015 attacks in Paris, to isolated acts that can be difficult to prevent.

“Threats today are increasingly difficult to identify and neutralize because we are confronted with threats that are extremely diffuse and protean,” Mr. Brisard said, adding that they come from individuals unknown to the authorities who may respond to calls from terrorist organizations.

In March 2018, a gunman killed four people in a supermarket in southern France, including a police officer, and two months later an attacker stabbed five people near the Paris Opera, one fatally. In October 2019, a veteran police employee killed four of his colleagues in a knife attack at the headquarters of the Paris police, in what the authorities later called a terrorist attack.