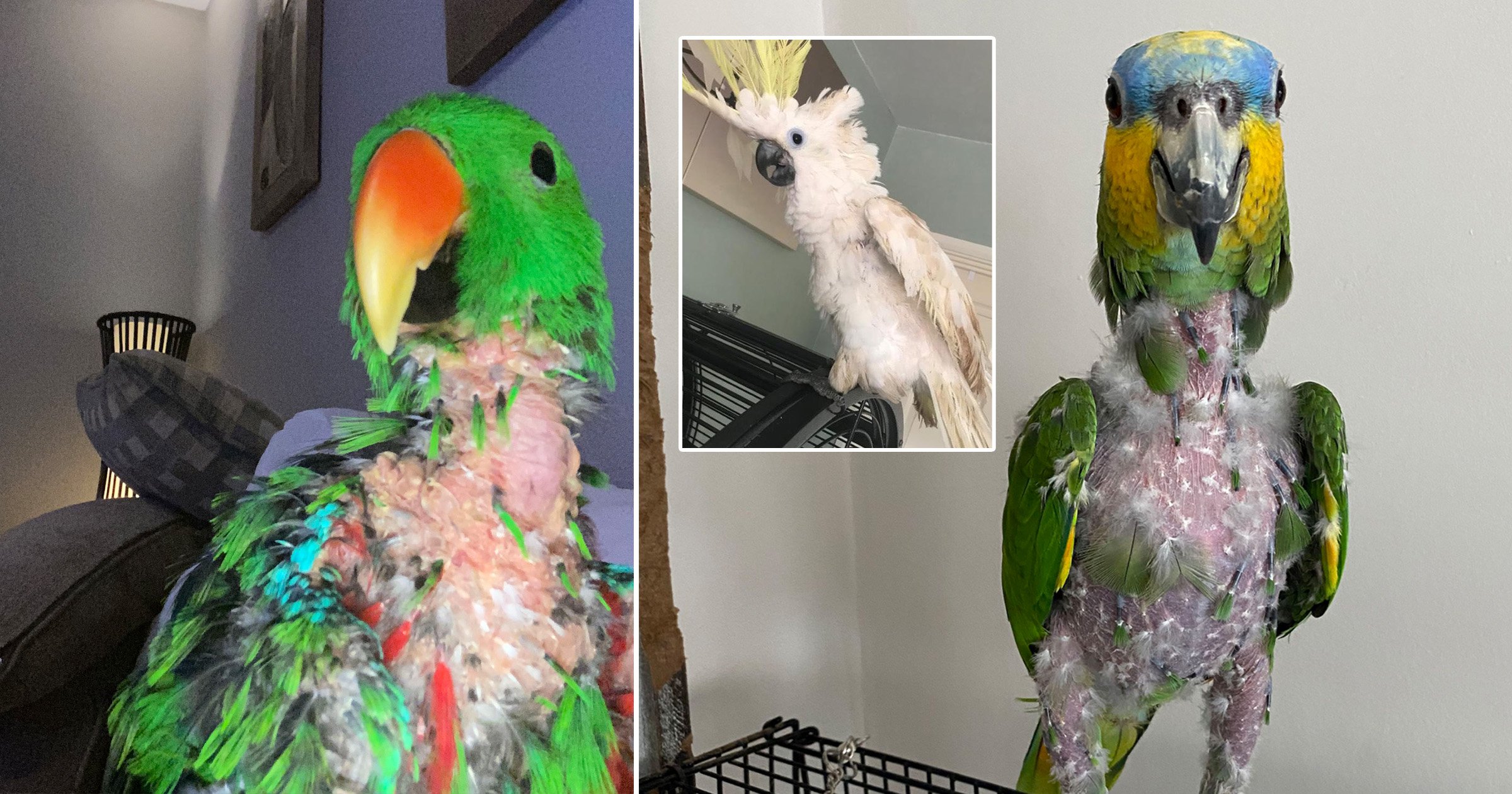 Pet parrots have resorted to plucking out their own feathers because their owners couldn’t look after them properly.

The charity Problem Parrots has taken in birds who were self-mutilating, left in tiny cages, fed the wrong diet and not given enough stimulation. Whilst some are still recovering, others have bounced back and are ready for adoption again.

When Rommie arrived at the charity’s branch in Melbourne, Derbyshire, he had already plucked all of his feathers off his body.

But he was still in the habit of self-mutilating so he would bite himself and end up bleeding, said Welfare officer Tanya Day.

‘His owners adored him but didn’t have the time for him and couldn’t keep up and he was getting worse and worse,’ she said.

Rommie’s owners did take him to a vet but it was not an avian specialist so the bird did not get all the treatment he needed. It also ‘wasn’t helping’ that he was not getting his specific diet requirements as an eclectus.

The charity rushed Rommie to an avian vet in Loughborough where they found that his wounds were infected and changed his collar so he could not pull his feathers out or bite himself.

Ms Day said: ‘Over three months he got a lot of medication and company from other birds – plus a large cage, toys, UV light and all the things he should have had – and now slowly but surely he’s recovering a lot of his feathers.’

Although he is making progress Ms Day thinks it will take the bird six months to fully grow his feathers back and another year for him to look like a normal eclectus again.

‘It may be that some areas never grow back so he might have a few patches,’ she said.

The charity thinks he is ready for adoption but wants him to go to someone ‘with a bit more knowledge because of his needs’.

Pickle, an orange winged amazon, is another bird who has lost all of her feathers after she plucked them out from stress and boredom.

Pickle lived with seven other birds who had been left for several weeks in the care of someone who stood in while their owner was in hospital.

But the carer only fed them and did not look after them in any other way. Then their owner died and the birds were passed on to the charity.

Ms Day said Pickle is a ‘severe plucker’ whose situation was ‘a bit of a mess’ after the bird lost her owner and another parrot she was close to.

Pickle has recovered and has been put up for adoption again.

Similarly, a greater sulphur parrot called Cookie was rescued after he had been locked in his cage in Buxton for at least five years.

Cookie’s owner also died and the owner’s daughter asked Parrot Problems to take the bird in.

Ms Day said: ‘We had to use bolt cutters to get him out – he was dirty and had broken feathers. Unfortunately the cage was also too small. There were no toys, just a dowel perch.’

He was taken to a safe house in Durham and given a bigger cage with plenty of toys.

Some parrot-owners love and care for their birds but cannot cope with the animals’ needs.

Casper’s owners, from Ashbourne, called the charity because they were working long hours and were not able to give Casper the ‘time and attention’ he needed.

Problem Parrots is appealing ‘desperately’ for more volunteers and safe houses in Derbyshire as any birds in the area can only go to Ms Day or have to travel out of the county.

Daughter who stabbed abusive father to death is cleared of murder