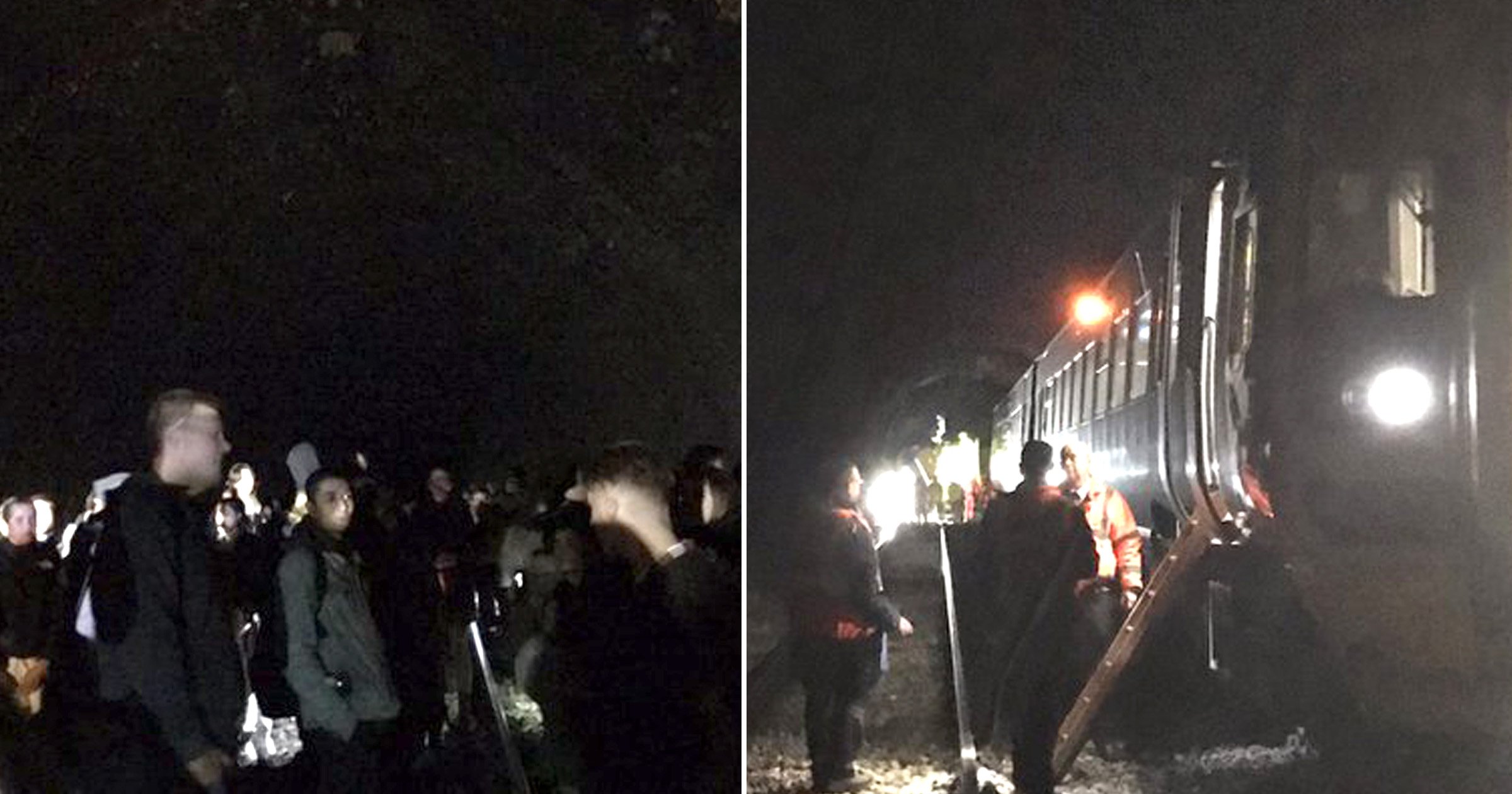 A passenger on one of the trains in the Salisbury crash has described walking past ‘sheered metal’ as she was evacuated in the dark.

Abigail Taylor was among around 120 people who were led to safety from the carriages following the major incident in Wiltshire last night.

She was onboard a Great Western Rail service that hit an unknown object at around 6.45pm as it came out of Fisherton Tunnel near Salisbury station.

A rear carriage derailed and is then thought to have been struck by a high-speed South West Rail service from London Waterloo to Honiton in Devon.

Eyewitnesses have described sparks flying and passengers being thrown from their seats during the crash, which injured 17 people and left the driver trapped. Thirteen people needed treatment at Salisbury District Hospital.

Abigail, 23, from Frome in Wiltshire, said: ’We stopped in the tunnel and then the train just jolted several times and it was clear something wasn’t right, it was almost like turbulence on a plane but worse.

‘I was at the front, furthest away from where the back carriage had derailed.

‘I was in carriage number one of four carriages. People were coming in saying the doors had come open and there was no carriage on the back.

‘It was unclear what happened until a person came out and he thought we had derailed, then he said we’d hit something electrical because there had been a power cut and then he said no, we’ve been hit by another train.’

Abigail estimated it was about five minutes between the train stopping and the impact of the collision.

She was then onboard the Portsmouth Harbour to Bristol Temple Meads service for more than an hour before passengers were evacuated by fire crews and escorted along the track to Salisbury station.

The receptionist was going from Portsmouth & South Sea to Warminster, which should have taken around an hour and a half.

She told Metro.co.uk: ‘I was just confused, it was a crazy scene as they took us down ladders to get off the train. It was dark and a good chunk of the walk was in the tunnel, it was about three quarters of a mile and there were a load of staff to meet us at Salisbury. There were people with little kids.

‘It was not clear how serious it was until we got off the train.

‘We could see the carriage was at an angle and there was sheered metal where the carriages meet, with the emergency services trying to lift people out. It was a miracle no one was killed.

‘People were saying there was a tree that had fallen, which was why we had derailed and something happened to the signals, which was why we got hit by another train. But I don’t know if that was accurate or not.

‘The train I was on left Portsmouth at ten past five on a Sunday, if it had been at a peak time there would have been many more people on board.’

Abigail’s dad picked her up at Salisbury and she went back to work today by train, tweeting: ‘Shocked to discover I’m that committed tbh’.

Another passenger, Cameron Thrower, needed hospital treatment after injuring his arm and shoulder.

He told the BBC: ‘We were being tossed around and I turned around behind me to see a huge whoosh of fire and sparks.

The driver, who was trapped in his cab, was treated in hospital for relatively minor injures.

Specialist teams are continuing to work at the scene today.

Most of the lines serving Salisbury are shut and will remain closed ‘until at least the end of the day on Thursday’, National Rail Enquiries said.

Transport Secretary Grant Shapps said investigations into the crash would be undertaken in order to help prevent similar ‘serious’ incidents in future.

He tweeted: ‘My thoughts go out to those affected by the serious rail incident near Salisbury.’