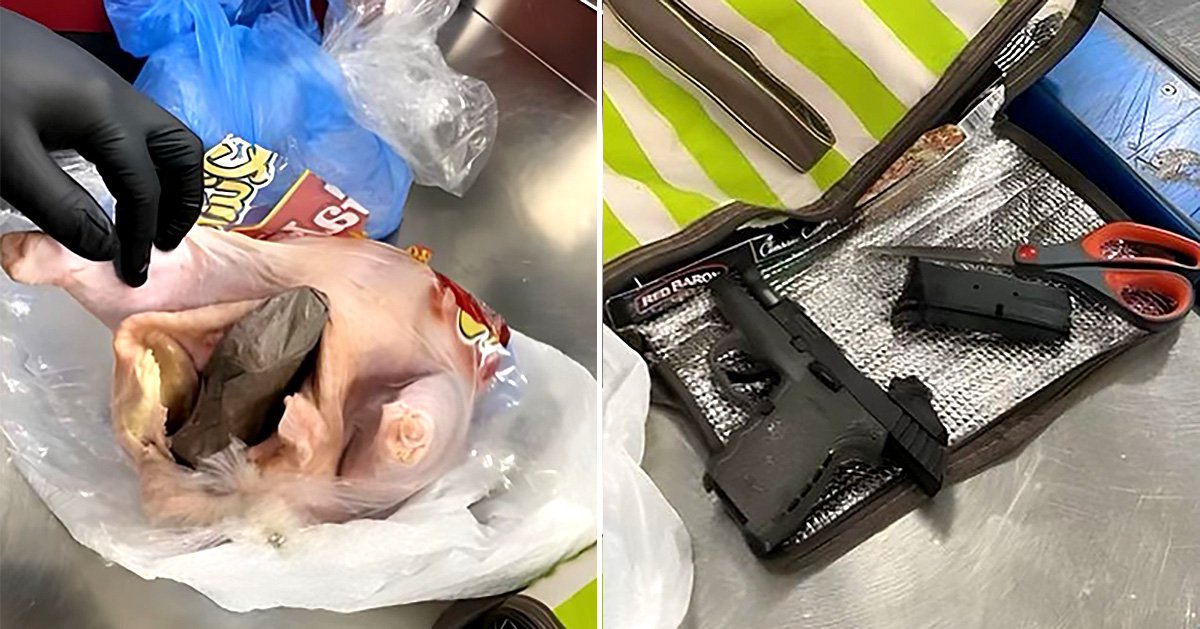 Something was a-fowl at the baggage screening station at an airport in the US.

Transportation Security Administration (TSA) agents were stunned to find a raw chicken in a passenger’s bag at Fort Lauderdale-Hollywood Airport.

Wrapped in plastic, this could have been an ordinary supermarket purchase if it did not contain a gun inside.

Officers discovered the firearm wrapped in what looked like thin paper packaging.

Posting pictures of the bird and the gun on Instagram, they joked the scheme ‘wasn’t even half-baked.

‘The plot chickens as we barrel our way closer to Thanksgiving,’ security began boasting about the discovery using every pun imaginable.

‘For us, it is a time to be thankful that our officers are always working around the cluck to keep you safe.

‘Take for instance this “hen you believe it” discovery at Fort Lauderdale-Hollywood International Airport.

‘We hate to beak it to you here, but stuffing a gun in your holiday bird for travel is just a baste of time.

‘This idea wasn’t even half-baked; it was raw, greasy, and obviously unsupervised. The only roast happening here is this poor packing choice.

‘Feather you like it or not, there are rules for traveling with guns and ammunition.’

Officials did not reveal if the passenger was arrested of any other details around the incident.

According to the TSA, people are allowed to travel with guns in checked luggage, if they are properly packaged and declared at check-in with the airline.

Guidance says that firearms must be unloaded, packed in a hard-sided case, locked, and stored separately from ammunition.

And a raw chicken seems to not fit the bill.

Travellers who bring weapons to a checkpoint are subject to federal civil penalties of up to $13,900.

Sir Clive Sinclair: Tributes pour in for inventor who wanted tech to be affordable for all