The cabbies who have been dubbed “London’s finest” also made the same tribute when Prince Philip passed away in April 2021. The ever-increasing amount of black cabs lining the Mall touched the hearts of those at Buckingham Palace and on social media.

ITV news interviewed one of the taxi cab drivers on the Mall who explained: “It’s for the Queen, we did it for Prince Philip as well when he passed.”

The driver began to cry as he looked towards Buckingham Palace and covered his mouth with his hand before adding: “She’s the only constant we’ve all had in our lives.

“I just want to show my respects.”

The show of emotion from the driver touched the hearts of users on social media who reacted to his comments about the constant Queen. 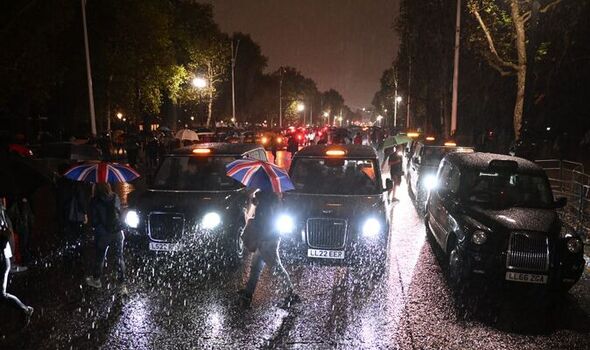 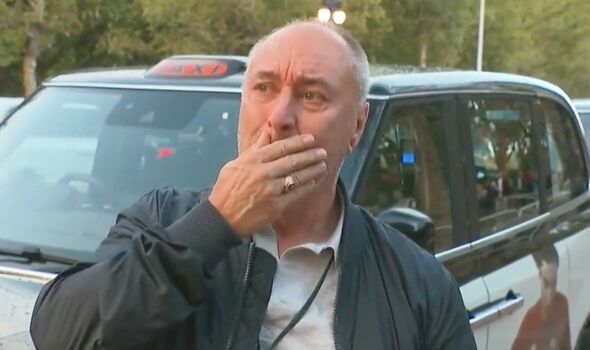 “Politicians come and go and seemingly flex with the wind, but the Queen was the great unifying force that provided constancy.

Another user added: “Thank you Sir for your heartfelt sadness and true feeling.

“Our Queen served her country and her people with devotion and dedication, she will never be replaced.”

Meanwhile, Paul Brand, an editor at ITV News tweeted an image of the black cabs lined down the Mall with the caption: “Incredibly moving tribute as black cabs line up silently on the Mall to pay their respects to Queen Elizabeth.”

Other users praised the tribute with many getting emotional as user @hannah_fran_ said: “I was okay until I saw all the black cabs lined up on the Mall and now I’ve got something in my eye.”

One user called the cabbies “great patriots” with another labelling them “London’s finest”.

Veteran cab driver Michael Ackerman has been driving London’s roads for 26 years and spoke to PA with his friend Robert Caulder who has driven cabs for 10 years and was one of the first to arrive at the Mall at 6:50pm.

Mr Ackerman said that he and his fellow drivers came to “show respect” for the late-Queen.

He added: “We now know the Queen’s passed, the only woman we’ve ever known, our constant in both our lives and we’re showing our respect.

“There would have been a lot more cab drivers here, but they’ve closed the road, so no more can get here.