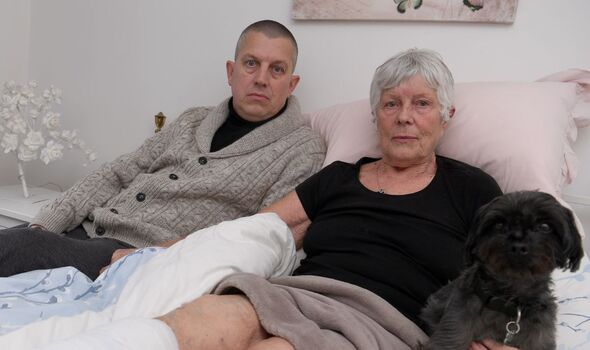 A pensioner spent four hours in “excruciating pain” waiting for an ambulance in the snow after falling down a manhole.

Christine Cowell was stuck for nearly an hour before someone heard her screams and rescued her.

The 79-year-old from Great Cambourne, Cambridge, had left her maisonette on December 12 to visit a neighbour the day after it had snowed.

She was walking across the resident’s car park at the back of her home when she fell down the manhole, which was covered by deep snow.

She was stuck in the manhole, somewhere between her right knee and thigh, while her left leg was “trapped somehow under the lid”.

Unable to move, she began screaming and shouting for help.

Christine’s son, Steve Sparks, spoke on her behalf; he told Cambridgeshire Live: “She was in the manhole crying out for help, as she couldn’t get out.

“Nobody could hear her, she was literally screaming and crying for help but nobody could see or hear or anything.

“She was in there for about 45 minutes before a neighbour heard her screams and then alerted other neighbours”.

Asking Christine how she felt when stuck in the manhole, she said: “‘I’ve been trying to think, I think it was such a shock. I was walking and then I wasn’t and I didn’t know where I was and the pain was excruciating and I couldn’t move'”.

When she could, she was screaming and shouting.

Christine said she was aware there was a problem with the manhole and claims it had been reported before by one of the neighbours as an issue due to it “being loose and not fitting properly”.

However, with the snow covering it, she could not see where it was.

Neighbours arrived to help Christine, including her granddaughter Tara and close friend Jill, who actually lifted the manhole lid away from her.

Together, the neighbours lifted Christine out of the manhole and called an ambulance at around 4pm.

Steve said the neighbours were told “not to move her and to keep her lying down” and were told “unfortunately it would be up to four hours before an ambulance could get to her”.

Christine lay on the snow-covered floor with her neighbours while they supported her and tried to keep her warm.

They put yoga mats and a cushion underneath her bottom, and a number of blankets around her, a neighbour also lit a fire in a type of pit to try and keep her warm.

Steve arrived at the scene at around 4pm and said she was “screaming in pain” and kept saying “my legs, my legs”.

Steve said: “We just waited and waited for the ambulance to arrive, we kept phoning up again to ask when the ambulance was arriving and they said ‘sorry it is very very busy’”.

He claims they explained the situation to the emergency services saying: “We’ve got nearly an 80-year-old woman laying in the snow in the carpark with potentially two broken legs and no pain relief.”

Asking how he felt when waiting with his mum for the paramedics to arrive Steve said: “I was a mixture of anger and concern. I was quite angry that obviously, the ambulance wasn’t there and I was getting quite tense.

“I just wanted to pick her up in my arms and put her in the back of the car and take her to the hospital, which I nearly did but the neighbours stopped me, as they were told to leave her laying down.

“It was absolutely horrendous, the screams and the crying, you don’t want to see your own mum crying like that at her age.”

While waiting for the ambulance to arrive Christine said “I couldn’t tell you how many times I passed out. The neighbours, they just kept me going, absolutely amazing.

“I think they stopped me from going unconscious because they kept talking to me, but I do remember passing out two or three times. I think it was the pain, on a scale of one to ten it was 100, it was excruciating”.

Steve claims the paramedics “turned up at about eight o’clock” and were unaware of how long mum had been there.

Christine had a big laceration on her right leg and her left leg also had a bad blood blister.

She was taken to Addenbrooke’s Hospital for further care where she remained for four days.

An East of England Ambulance Service spokesperson said: “We would like to apologise to Ms Cowell for her experience.

“The NHS is currently facing incredibly high demand and we are working closely with hospitals to reduce handover delays and improve care to our patients.

“We are doing all we can to boost the number of ambulances we have on the road, including recruiting additional clinical staff and using non-clinical drivers.

“We’re also working to reduce the number of patients going to hospital, including directing patients to urgent community response services when appropriate.

“We continue to ask the public to use NHS resources wisely as we must prioritise those most in need.”

Steve said Christine was known as the “manhole woman” at the hospital “which she thought was quite funny”.

He said: “She got such a big send-off by everybody from the nurses and doctors”.

Luckily Christine had not broken any bones but said her left leg is now “black with a blood blister that is the size of an orange” and the right has a dressing on where it was severely cut and bruised.

As her home in Great Cambourne has stairs Christine could not go home but instead is staying at her friend Jill’s home nearby to recover.

Christine said: “I’m so shaky, I keep getting flashbacks now of what happened, my legs are still very painful, it’s just knocked me for six. I don’t feel the same, to be honest.

“I’m a very independent woman but it’s clearly knocked me back. I do try to walk around to get them working but it’s a bit of a job. It’s really knocked my confidence”.

Talking about the manhole she said: “This one should have been checked. It should never have happened”.

After the incident, neighbours put something over the manhole to cover it.

A spokesperson from Charitable Housing Association in Cambridgeshire (CHS Group) said: “The health and safety of our residents and staff is of paramount importance to CHS Group.

“We are very sorry to hear about an accident involving one of our residents on December 12, which we were alerted to on December 19.

“CHS Group was not aware of this accident prior to December 19. On December 12, 2022, our contractors received a report that a manhole cover at Friar Way was broken and that an item had been placed over the affected area to make it safe until a repair was carried out.

“Our contractors attended the site on December 19 and found that the metal ring inside the drain that holds the lid in place was displaced; they secured the ring back in place and put the drain lid back in its correct position.

“We are now carrying out a full investigation into what happened and are liaising with the resident directly.”