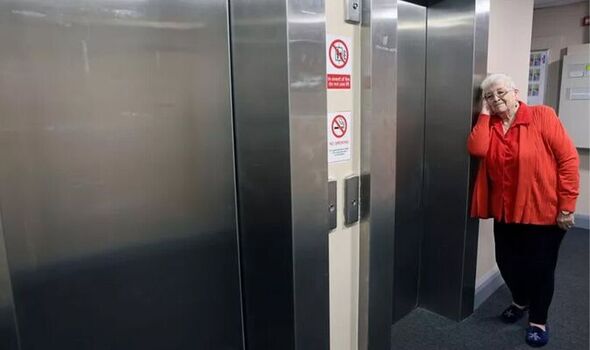 Elderly residents at a tower block have shared their frustration after being left “locked in their houses” because of a broken lift.

Neighbours say that they are fed up by repeated problems that have made it impossible for some people to get out of the building.

Lilian Vaatainen told ChronicleLive that the lift serving odd-numbered floors at The Spinney, a 15-storey Newcastle high rise, has broken down several times this year – sometimes being out of action for weeks.

The 73-year-old recently fell and injured herself descending the stairs to get to her fifth-floor home, having been forced to take the lift to the floor above, and says that her husband and other people with worse mobility problems have no way of getting themselves to and from their flats.

The latest problem with the lift in the Your Homes Newcastle-managed block saw it break down earlier this month and then again shortly after engineers came out to fix it last Saturday, November 19.

Mrs Vaatainen said: “We have people in this building who have essentially been locked in their houses. We have a lot of older people, some are disabled.

“The lift was off for five weeks at Easter and then again a good few more times since. One day I was stuck down in the lounge for five hours waiting for them to fix it.

“My husband is in a wheelchair and cannot stand, there are other disabled people here in the same situation as him. They just cannot get out of the building. We have missed doctor’s appointments because of this. God knows what else people are going through. I was trying to come down the stairs last week and I fell and hurt my back and my shoulder. But nothing is being done.”

The Spinney, which has 98 flats and is exclusively for people aged over 55, is far from the only tower block in the city to have suffered infuriating lift problems this year. Council bosses issued an apology in September to residents who had been left stranded by the breakdowns and admitted that a newly-contracted maintenance provider had “not been performing to the standard we would hope”.

Jen Vinton, Group Director of Housing Services at Your Homes Newcastle, said: “We would like to apologise to Mr and Mrs Vaatainen and to the residents of The Spinney who have been affected by the recent lift issues.

“We know how inconvenient and distressing it can be for our customers when there are problems with lifts and we can assure residents that we are working closely with Newcastle City Council to address the concerns with the lift contractor.

“While the lift that goes to the odd floors has been undergoing repairs, our staff have been making extra visits to the building to monitor the progress of the repair and provide reassurance to our customers. We have visited every property to offer extra support to any customers who require it and we have also sent a letter to all customers to ensure anyone we weren’t able to speak to in person has been kept up to date.

“We are closely scrutinising the performance of the lift contractor with the contract owner Newcastle City Council. It is our priority to reduce any future disruption.”

‘You’re either royal or you’re not!’ Harry and Meghan under pressure to drop Sussex brand