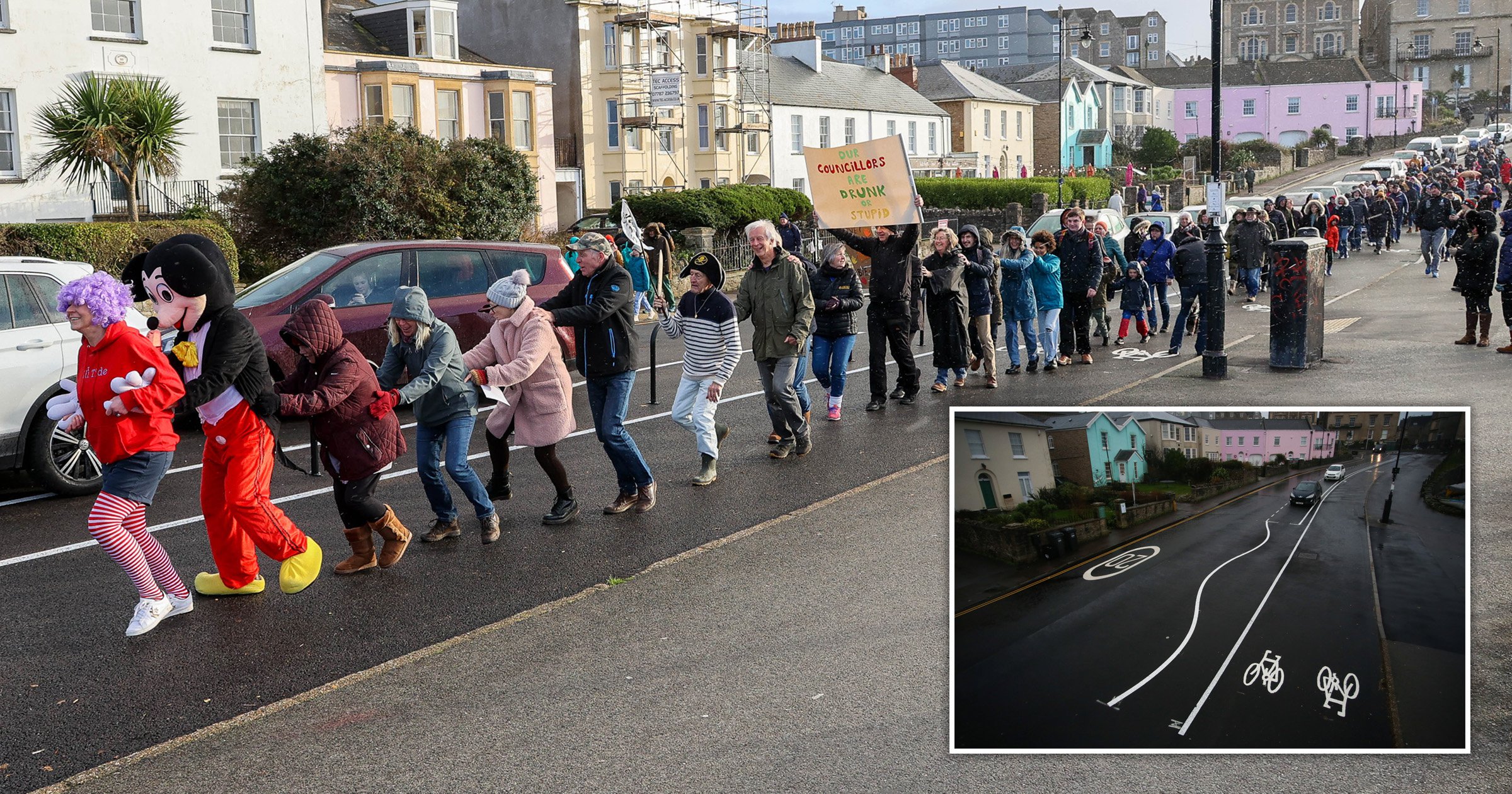 Residents in a seaside town home to a bizarre set of ‘wiggly’ road markings have voiced their displeasure by staging a conga protest along them.

People were left confused and angry when a series of curvy lines were painted alongside the historic seafront in the town of Clevedon, Somerset.

According to North Somerset Council, the lines were designed to slow down traffic in the area by making the road feel narrower.

But locals and business owners were infuriated by the move, which they claim looks like a ‘driving lane for drink drivers’ that has turned their town into a nationwide laughing stock.

More than 6,000 people signed a petition opposing the plans, and yesterday campaigners took to the streets to voice their displeasure by donning fancy dress and forming a conga line along the markings.

The organiser’s post read: ‘Wavy Wriggle to Save Our Seafront.

‘Are you against the barmy curvy lines that have made North Somerset Council into a viral laughing stock of the nation?’

‘Join us on Sunday 15 January at 3pm by Clevedon Sailing Club to “Snake On Sunday” where we will “Walk the Line” in a wavy wiggle conga to show how we are against the unsafe wiggly changes to our once lovely Victorian seafront which has been vandalised by NSC.

‘We will demand it’s put back to the safe space it once was. Fancy dress optional Home made Banners essential.’

The markings were added as part of plans to introduce a new beach-front cycle path along the seaside road.

It is also hoped the wiggly lines will help reduce unwanted parking.

A council spokesperson said: ‘The lines are a design feature to reduce the potential abuse of parking at these locations and help make the road feel narrower, which is a technique used to slow traffic speeds.

‘In this case, the area is adjacent to the sailing club entrance so needs to be kept clear.

‘A wavy line provides uncertainty to the driver and is proven to help reduce unwanted parking.’

The squiggly lines are due to be finished with a surface treatment in the spring.

Save Our Seafront spokesperson Cathy Hawkins told the Somerset County Gazette: ‘We are against the changes for many reasons, but primarily we are concerned about the safety issues of this scheme.

‘For this reason we have written to the Rt Hon Mark Harper MP, secretary of state for transport, as we are keen to know if there are any mechanisms available to bring the scheme to a halt and whether there are any precedents of which the department is aware, where similar schemes have been stopped or compulsorily altered because of safety concerns.

‘We will protest the changes on Sunday in the hope that North Somerset will listen and talk to us about our safety concerns, not least of which is the silly wriggly line making the seafront look like Blobbyland.’

North Somerset MP Liam Fox described the scheme as a ‘shambles’ and urged council chiefs to kill off the project and apologise to the people of Clevedon.

He also signalled his intent to raise the issue with the transport secretary.

Brexiteer business boss hits out at Hammond in FURIOUS Brexit rant – ‘NOT up to the job!’