Adults and children have been pictured playing on frozen lakes just days after four young boys died in Solihull.

Footage captured at Sefton Park in Liverpool shows 10 people sliding, dancing and playing football on the dangerous surface while ignoring warnings from passersby.

Park wardens arrived after around 20 minutes and ordered the group to get off the lake, but they were ignored and reportedly had abuse thrown at them by the crowd.

Nick Robinson, 49, who captured the footage, told the Liverpool Echo: ‘All I could think is there’s no way these people have not seen the story about those little boys in Solihull and I was astounded.

‘One woman went on the ice, and then like lemmings, the rest of them followed until there were ten of them on the ice. 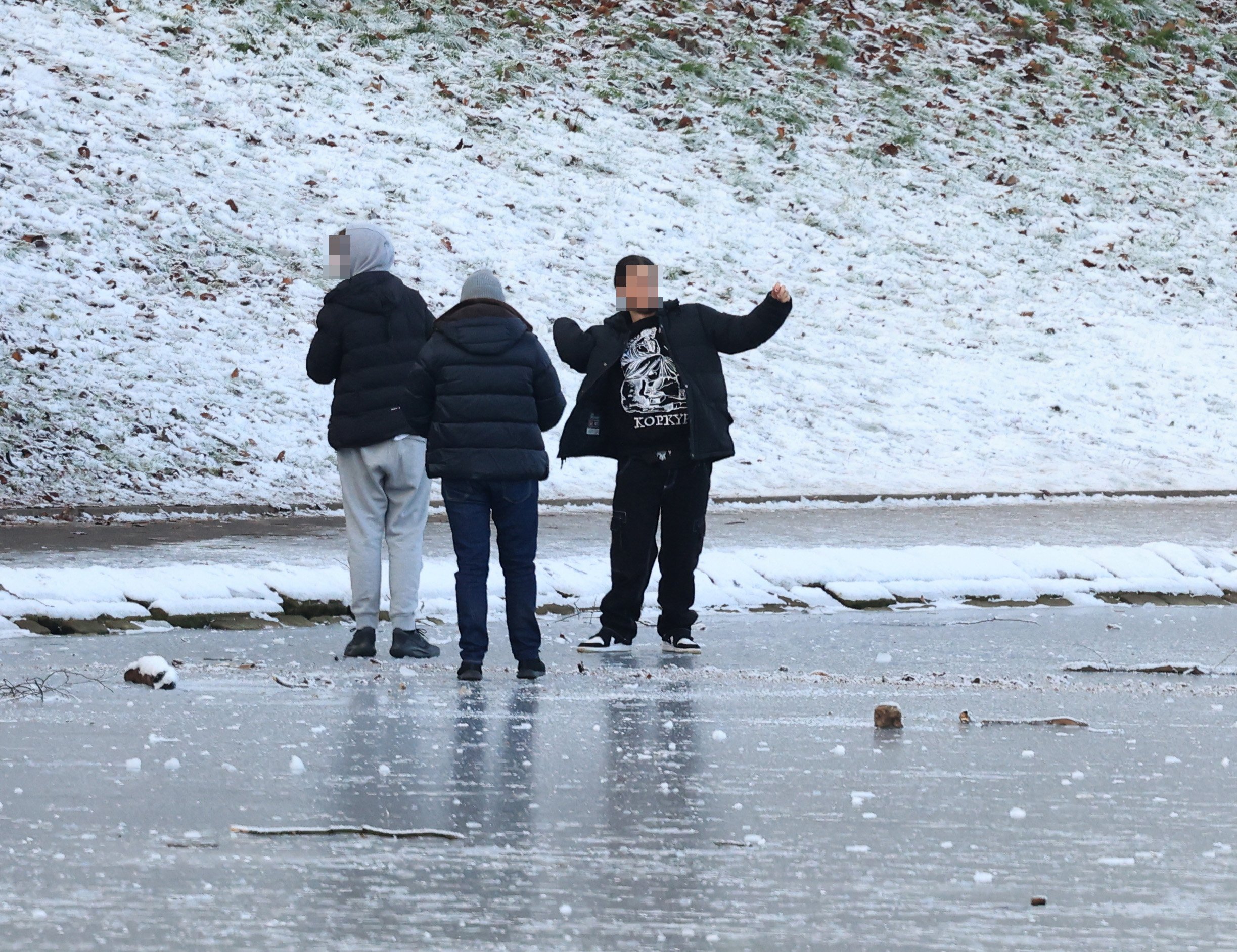 ‘At one point they were getting really close to the darker section of the ice, where it’s thinner.’

‘They all started shouting abuse and one of the women, who was in her late 20s to early 30s screamed “who do you think you’re talking to, we’re old enough to make our own decisions”.’

Yesterday Liverpool City Council called out the group who were ‘risking their own lives’, and expressed disappointment after more people were spotted walking on the lake just yards away from a section of ice that had melted and cracked.

Liverpool Councillor Frazer Lake said: ‘We need to lead by example on this and actually – in the tragic circumstances of what has happened last week it’s really disappointing to see this and frustrating in that people are so recklessly endangering their own lives, and endangering the lives of others.’

Earlier this week four boys, including two brothers and a cousin, died after falling through an icy lake in Solihull. The boys involved were brothers Finlay, eight, and Samuel Butler, six and their cousin Thomas Stewart, 11, as well as ten-year-old Jack Johnson.

The families of three of the children who fell into the lake have released pictures and a tribute to their ‘beautiful boys’.

Their parents have said: ‘As a family we are devastated at the loss of our beautiful boys Tom, Fin and Sam in such tragic circumstances.

‘We would like to thank the emergency services for all they did in rescuing the boys and to the community for their support; it has been overwhelming.’

‘We would like to pass on our condolences to Jack’s family at this very sad time, and ask for privacy from the media to begin to grieve.’

A spokesperson for Cleveland Fire Brigade said: ‘We have just attended an incident involving a dog that has fallen through the ice on Hemlington Lake. Whilst our crews were in attendance children were seen trying to walk on the ice.

‘Frozen ponds and lakes may be very tempting to walk or play on but please stay well away and do not put yourself or anybody else in danger.

Inside the Queen’s perfect Christmas at Sandringham – ‘Very good hostess’