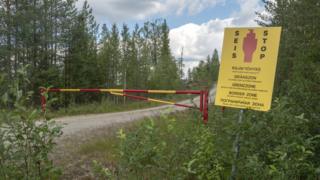 A man has been arrested in Russia for erecting fake border posts to trick four migrant workers into thinking they had entered Finland.

After reaching the posts, the man left the group to wander alone in what they believed was the EU country – but was actually a swampy forest in Vyborg.

After a while the four South Asian men were stopped by real border guards, who told them they were still in Russia.

All five men were reportedly detained on 28 November.

On Wednesday, a court in St Petersburg fined the would-be migrants for immigration offences and ordered their deportation.

The fake smuggler is facing the more serious charge of fraud. He has been detained, pending trial.

Officials did not specify which country the men were originally from.

Footage posted on Russian social media appears to show the men being arrested. They are seen standing in the darkness among fir trees, holding their hands up as FSB border agents shine torches on them.

Ratko Mladic, the ‘Butcher of Bosnia’