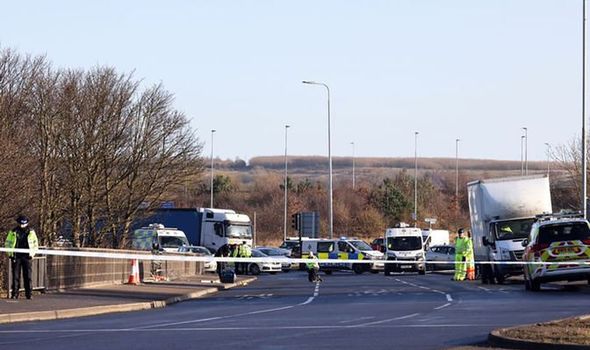 A car has careered off the A177 flyover at junction 61 for Bowburn, County Durham, closing that road and the main A1(M) carriageway below. Police say the roads will remain shut for “considerable time”. An air ambulance is at the scene of the crash.

Northbound traffic is being diverted off at junction 60 for Bradbury, County Durham, and onto A689 east to Sedgefield. They then must use A177 north through to Tursdale, before the road closure, to rejoin the motorway.

Southbound traffic must leave at junction 61 and use the reverse of the route, initially going through Tursdale, onto the A177 south to Sedgefield and then onto the A689 west to junction 60 at Bradbury.

Traffic is busy on these roads, though, particularly the A177.

Congestion is heaviest on the southbound A1(M) itself though, from junction 62 for Durham, reports Chronicle Live.

Northbound traffic is back to junction 59 for Newton Aycliffe, County Durham.

A spokesman for Durham Constabulary said: “Police are dealing with a serious collision on the A1(M) at Junction 61, Bowburn Interchange. At approximately 10.35am this morning, a vehicle which was driving on the A177 flyover has left the carriageway and landed on its roof in the central reservation of the A1(M) below.

“The driver of the car freed themselves from the wreckage and the passenger was cut free.

“No other injuries have been reported. Emergency services are on the scene and both the A1(M) and the A177 are closed in both directions. The road is likely to remain closed for a considerable time.

“Drivers are urged to avoid the area and find an alternative route if possible.”

A Great North Air Ambulance spokesman said: “Our crews activated at 10:41 this morning and arrived at 10:51. A team of paramedics and doctors were assessing and assiting the scene and an individual was airlifted to hospital.”

Why 85 is the new 65 in an ageing Irish workforce

Trump says rape accuser ‘totally lying’ and ‘not my type’