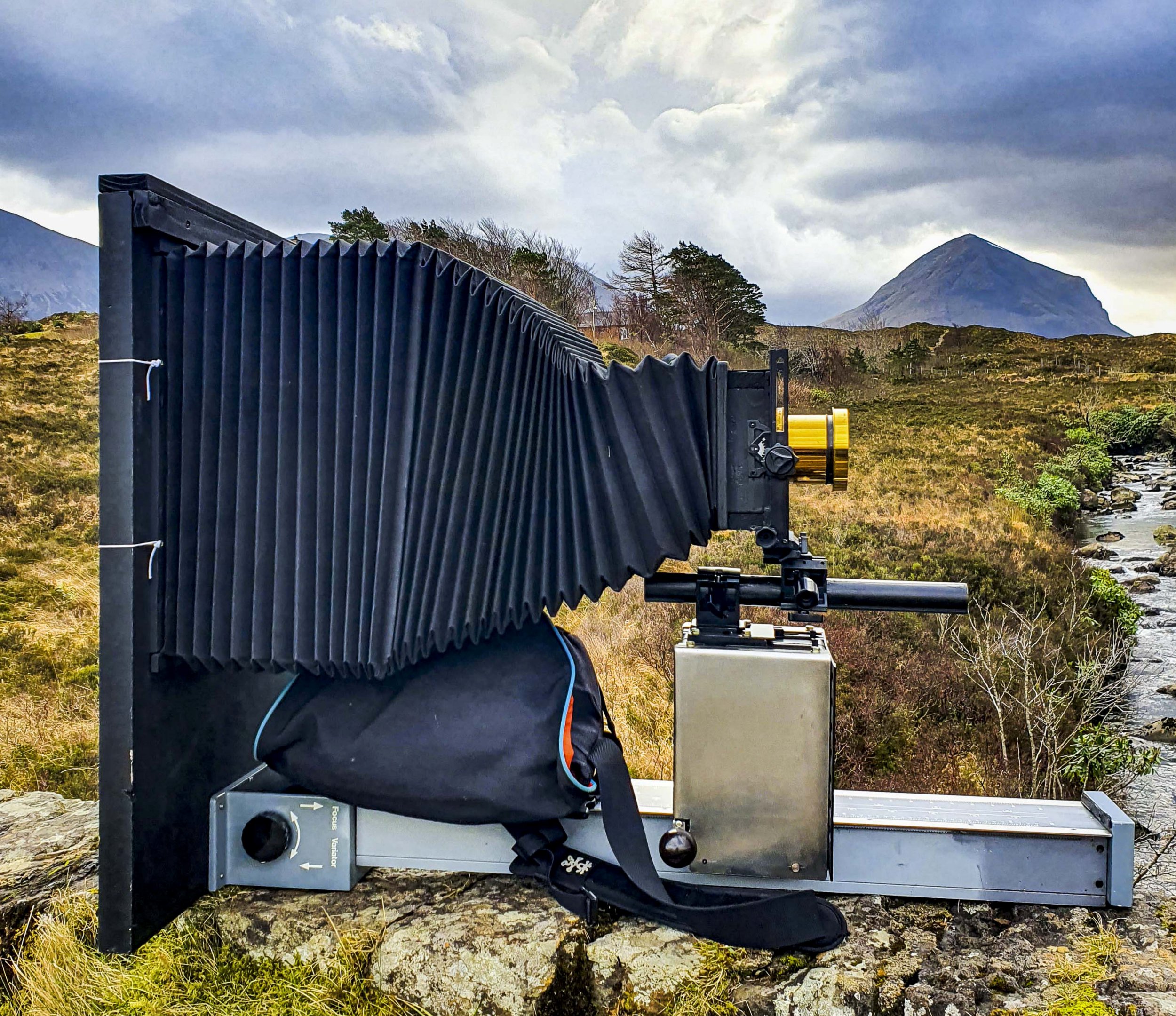 A photographer is scaling a mountain to take incredible Victorian style pictures using a rare process – invented nearly 200 years ago.

Simon Riddell, 41, took up wet plate collodion in 2020 to help with his mental health and said the complicated process is used by just a handful of people around the world.

Invented in 1851, it sees photographic material, usually glass or aluminium coated in collodion, sensitised in a silver nitrate bath, and developed within ten minutes.

Dad-of-one Simon taught himself the technique in an old leaky garage in Nigg, Scottish Highlands, and said the amazing pictures are so detailed they look 3D.

He said wet plate snaps are higher resolution than digital images and don’t degrade over time, with less than 1,000 people in the world practising the artform.

Simon, who lives on the Isle of Skye, said: ‘Pre-cvoid I was going through a real rough patch, it was a period of turmoil for me.

‘But around the time of the first lockdown I got the material for the wet plate collodion through the post and it was something I could really immerse myself in.

‘I taught myself, I didn’t do any formal training, just watched one or two You Tube videos and talked to American wet plate photographer Shane Balkowitsch.

‘It was a really frustrating process because it is so technical.

‘It was a huge learning curve but exactly what I needed at a difficult time, I would just lock myself away and work on it.

‘It was during lockdown and so because there was no one else around I would do self-portraits which were incredibly raw and emotional.

‘I started an Instagram account for the pictures and people who had also been having a tough time would reach out to me and say they really connected with them.’

Keen climber Simon is now using the technique to photograph the Cuillin Mountain, on Skye, and charting the process for a documentary film.

He climbed the mountain for the first time in December but plans to scale it once a month until March, with the help of a mountain guide.

Simon walks all night to be at the right spot by sunrise to start shooting in the day light, and can take around four pictures in that time.

He uses a changing tent which is completely dark inside with just a window to put his head through to develop the pictures – which takes around 30 seconds.

Simon who suffers from PTSD, hopes the project will help raise awareness of mental health recovery and encourage people to get outside their comfort zone.

He also aims to inspire people to reconnect with early photography in the age of social media.

Simon said: ‘Images today are taken quick and easy, they are disposable and often don’t mean anything, especially in today’s world with social media.

‘Wet plate is incredible and so detailed it almost looks 3D – they are much more high res than digital pictures.

‘They will never fade or degrade.

‘I wanted to reconnect with early photography.’

He is raising £10,000 to fund the film, covering the costs of purchasing chemicals, outdoor filming equipment, travelling and post-production.

Simon said: ‘I have always loved the Cuillin, it’s stunning and revered for its climbing.

‘People who know about wet plate think I am absolutely mental for trying to do it up the mountains – there are a lot of risks.

‘It took about a year to plan the expeditions and get all the equipment.

‘On the first expedition, which was over three days, my pack weighed around 45kg with all the equipment and liquid chemicals I need for the pictures.

‘We walk all night to be at the right spot by sunrise to start shooting in the day light, and I can get about four pictures in that time.

‘I have a changing tent set up which is completely dark inside with just a window to put my head through to see what I am doing.

‘The pictures take about 30 seconds to develop.

‘You need to wash the plates for 15 to 20 minutes under running water which is really impossible up a mountain.

‘So I create a holding bath for them which is made up of 50 per cent water and 50 per cent anti-freeze.

‘Ideally the pictures should be developed at 20 degrees Celsius not up a mountain at minus 15.

‘I have to be so careful not to damage anything on the climb up or on the way back down and it’s obviously a lot of physical effort.

‘It is a lot of work especially when I get up there and I am not even sure I will be able to get the kit out of my bag never mind take the pictures.’

To donate to the film project visit the Gofundme page here.

Girl, 12, died from a 5cm ‘catastrophic’ stab wound to her neck, court hears