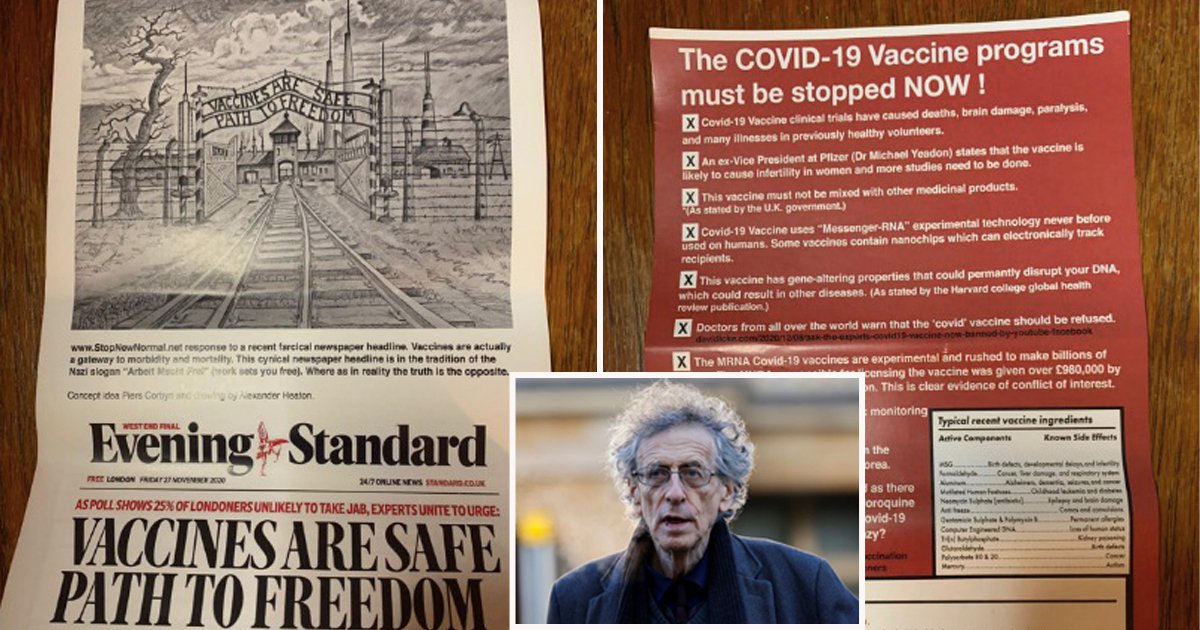 Anti-lockdown campaigner Piers Corbyn has designed a leaflet comparing the vaccine campaign for coronavirus to the Nazi death camp Auschwitz.

Mr Corbyn, former Labour leader Jeremy Corbyn’s brother, based the flyer on a headline in the Evening Standard which said: ‘Vaccines are the safe path to freedom’.

The posters show a drawing of the concentration camp gates, with the headline written there.

Written alongside the drawing is a direct comparison: ‘This cynical newspaper headline is in the tradition of the Nazi slogan “Arbeit Macht Frei (work sets you free)” whereas in reality, the truth is the opposite.’

The leaflets were posted throughout homes in Southwark, South London at the weekend.

They credit Piers Corbyn for the ‘concept’ and art by Alexander Heaton, who was charged with breaking Covid restrictions alongside Piers during protests in May.

Labour Councillor for South Bermondsey Leo Pollak posted a picture of the leaflets on Twitter asking Piers Corbyn to confirm it was him who had posted them.

The leaflets falsely claim that ‘some vaccines contain nanochips which can electronically track recipients’.

Mr Corbyn confirmed to the Evening Standard that he had been involved with designing the leaflets.

He said: ‘A group of us came up with the idea. The Evening Standard was saying that vaccines will set us all free and it is not true.’

Asked whether the leaflets broke the law, he said: ‘Of course not.’