The shocking scene, filmed by an onlooker, shows the moment a plain clothed policeman arrested a young man he suspected to be in possession of a Class B drug with the intent to supply in Romford, East London. The video, published online, does not show the whole incident but reveals the moment the policeman started beating the 17-year-old teenager with a baton despite already being handcuffed. The child can be heard screaming: “What the f*** are you doing to me? Why the f*** are you hitting me for?”

The handcuffed teenager then can be seen getting down on his knees and pleading: “I’m a child. I’m a f****** child.”

Onlookers can be heard criticising the officer as he urges them to “call 999”.

One said: “You can’t just hit him like that.”

The video prompted the outrage of former Deputy Mayor of London, Lee Jasper, who took it to Facebook to announce he would make an official complaint to the Metropolitan Police and the London Mayor Sadiq Khan.

Mr Jasper wrote: “As a former Deputy Mayor of London responsible for policing, I wish to make a formal complaint to the Metropolitan Police Service and Mayor of London about this wanton act of apparent police brutality. 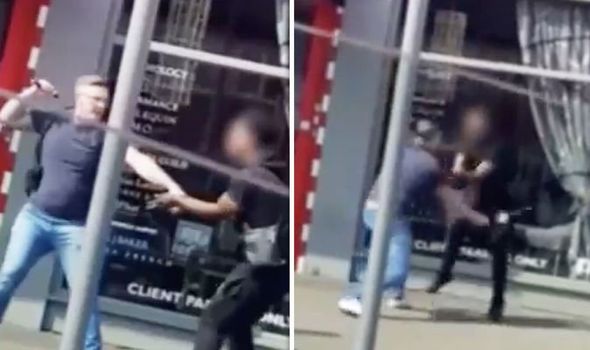 “I am aware that a complaint can be submitted through Twitter and wish to exercise my rights to do so now.

“This type of police racism and brutality is going to cause a riot.

”You have no legitimacy in policing people like this and soon from now, I predict your officers will be routinely resisted, in some areas, as a consequence of your utter failure to reign in officers such as this.”

A Metropolitan Police Service spokeswoman said: “Police were on patrol in Heath Park Road, Romford on Monday, 22 April when they found reason to stop and search two teenagers under the Misuse of Drugs Act.

“After a struggle, one male, aged 17, was detained by an officer. He was subsequently searched and was found in possession of Class B drugs. He was arrested for possession with intent to supply and obstruction of a drugs search.

“The second male, aged 14, escaped the officers and ran to his home address. Here, an officer found the male and after another struggle, he was detained. During the struggle, the officer was assaulted by the male.

“He was arrested for obstruction and assault on a police officer. Both males were taken to an east London police station and subsequently released under investigation.

“We are aware of footage circulating on social media. No formal complaint has been received at this time but the full circumstances surrounding the incident, including the actions of the officers, are being reviewed.”

COVID-19: Oxford vaccine to be tested on children as young as six in world-first trial